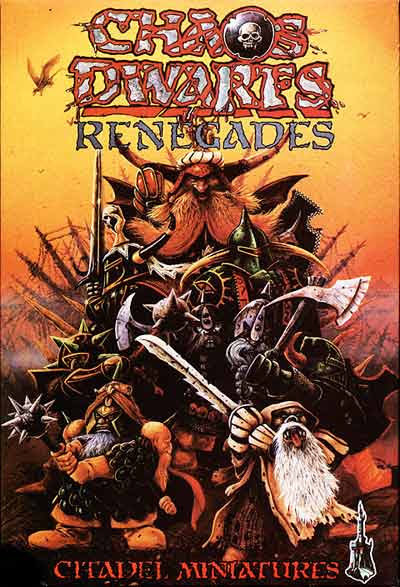 This is one of my favourite pieces of box art from Games Workshop back in the 80's, by John Blanche of course. The triangular composition gives a imposing height to the Chaos Stunties (what is the Master of Madness standing on at the top?) and the contrasting black armour with warm oranges gives an apocalyptic feel to the image. It feels a bit like a last stand for the Renegades, weapons drawn, back to back facing in different directions as they bid to make their stand against an advancing foe on the battlefield.

I've often wondered about their background and my initial knowledge was scant; I remember that the Old Dwarfs tunnelled deep and further North, until some went too far and were cut off from their brethren. The incursions of Chaos came and those isolated, North Eastern most Dwarfs became tainted by the touch of Chaos. So I've tried to do a bit of research about the Renegades in particular. Are they Renegades because they have turned to Chaos or are they renegades within the Chaos Dwarf community? White Dwarf 79 shows their release which hints at how Dwarfs have previously been seen as incorruptible: 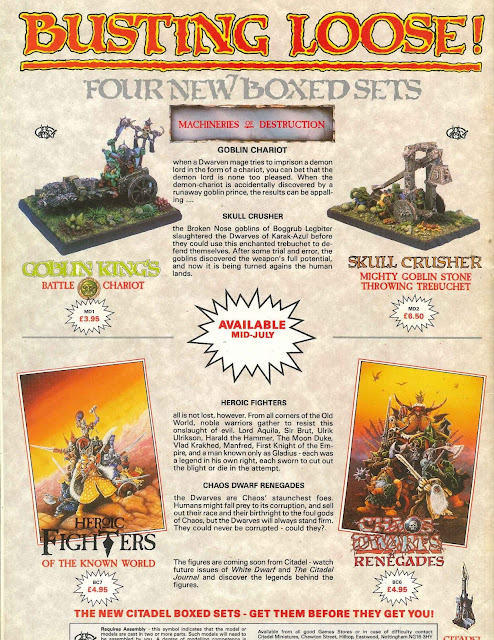 And White Dwarf 80 gives us this more detailed information: 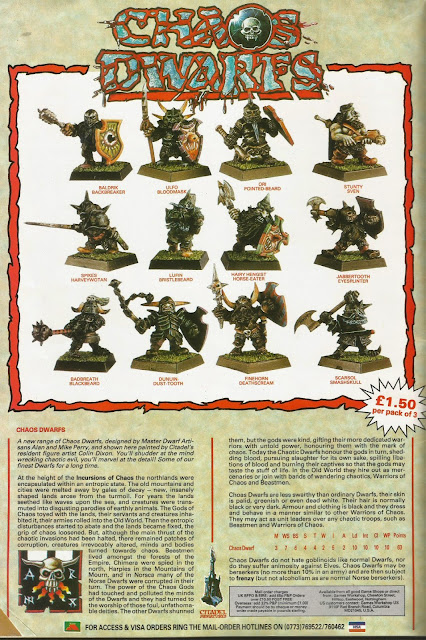 "The power of the Chaos Gods had touched and polluted the minds of the Dwarfs and they had turned to the worship of those foul, unfathomable deities. The other Dwarfs shunned them, but the gods were kind, gifting their more dedicated warriors with untold power, honouring them with the mark of chaos. Today the Chaos Dwarfs honour the gods in turn, shedding blood, pursuing slaughter for it's own sake, spilling libations of blood and burning their captives so that the gods may taste the stuff of life. In the Old World they hire out as mercenaries or join with bands of wandering chaotics, Warriors of Chaos or Beastmen.
Chaos Dwarfs are less swarthy than ordinary Dwarfs, their skin is pallid, greenish or even dead white. Their hair is normally black or very dark. Armour and clothing is black and they dress and behave in a manner similar to other Warriors of Chaos"

The last segment is most precious for me, I enjoy reading, as a painter, about how these characters/miniatures may appear, so when I come to paint I'll have some concept of how Chaos Dwarfs were imagined by the design team. Of course, this is not the be all or end all and I usually go my own way when painting, but I do like the description of "pallid and dead white skin, black armour" (which of course this ties in with the box art again) and inspires me to paint my own collection in this style.

Finally on the back of the boxed set it says about the Renegades: 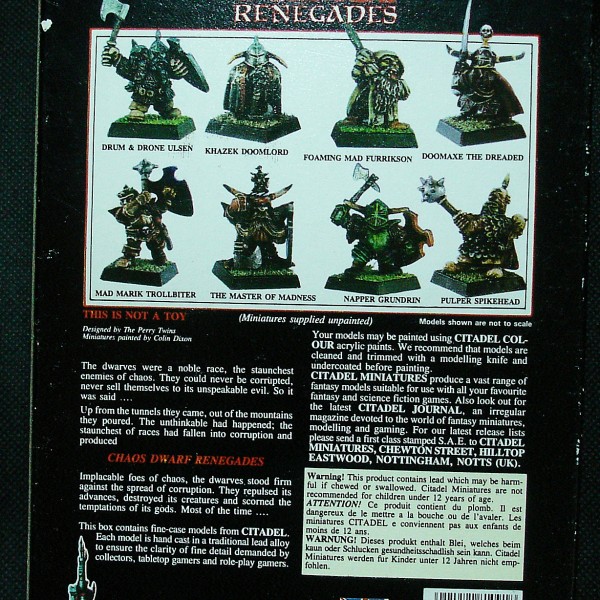 The box art illustration of course shows each of the eight Chaos Dwarfs that come in the boxed set and upon further investigation I remembered that each of them was named; Master of Madness, Khazek Doomlord, Foaming Mad Furrikson, Doomaxe the Dreaded, Mad Marik Trollbiter, Drum and Drome Ollsen, Napper Grundrin and Pulper Spikehead. This old habit of naming little miniatures gives them a little bit of extra character as I can imagine how some of them have acquired such titles and of course ties in with some of the Chaos attributes they have been given and sculpted with.

I never owned the boxed set as a kid, even though I always wanted to, but as an adult I have now collected the eight models and have started to paint them with my research in mind. Here are the eight Renegades (note the variation of metal colour - the three brighter ones are obviously much later in release, the duller ones much more likely to be from the 80's castings): 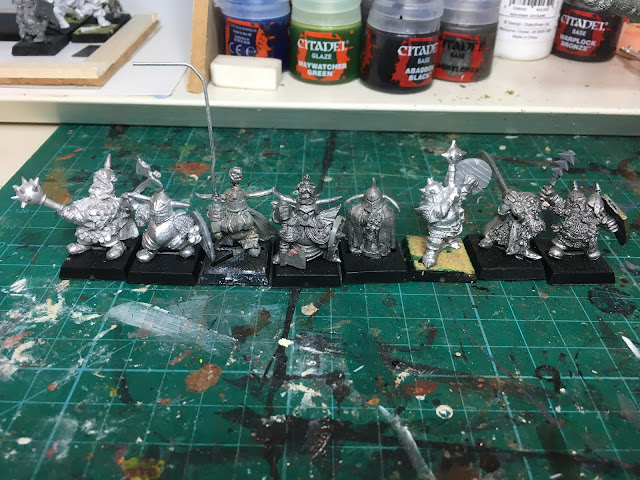 I considered recreating the box art by having the Master of Madness on a palanquin, or even raised on a stony outcrop with his guards less raised either side of him to create the triangular composition, but decided against this is in the end as I wanted to create a unit of them. I couldn't just field 8 Chaos Dwarfs, and because I love the models so much, I ended up collecting a few more to create a unit of 20. The Chaos Ogre was left over from a previous project and seems to fit in quite well with the short ones. 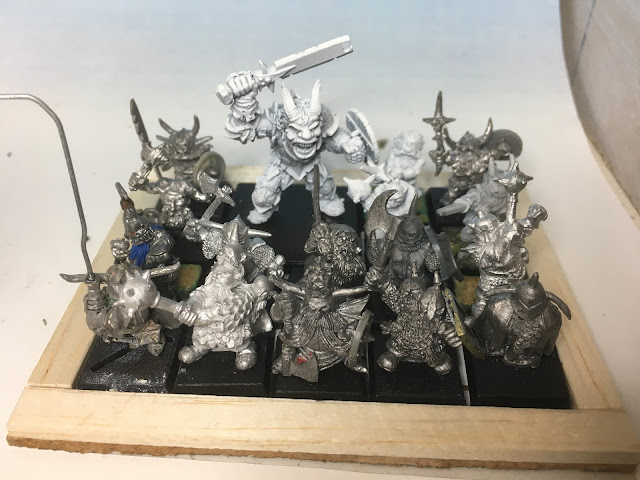 Here you can see how I've started to sculpt some Chaotic shields, using some of the illustrations from the Realms of Chaos books as inspiration. The standard bearer may well carry a banner that pays homage to the original box art by John Blanche.. 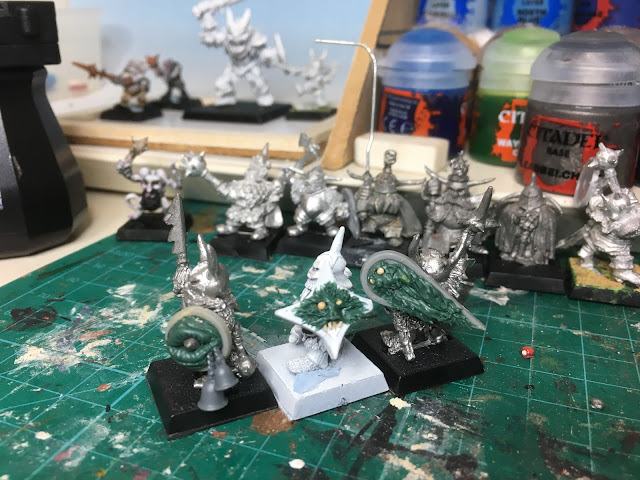 Painting is underway, you can see some wip in the background of the above shot. Until next time...

Posted by Stuart Bannister at 10:03