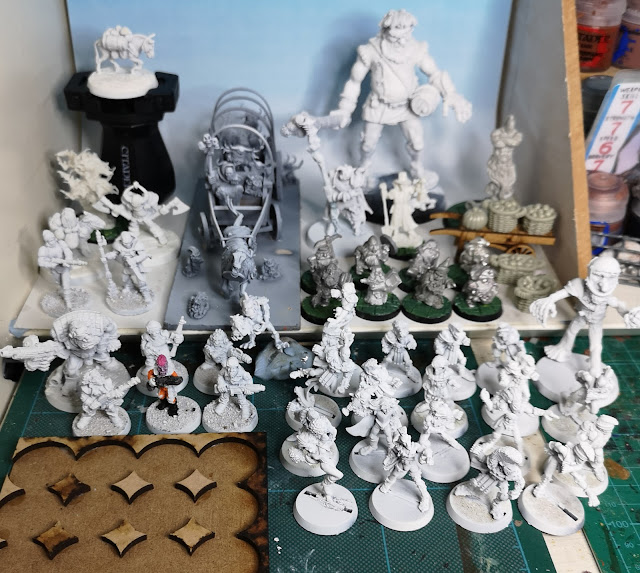 It's highly unlikely that I will paint any of these before a new idea/model/miniature jumps to the forefront, but just in case I do, here's what I plan to paint during the coming year.

I hope that priming them makes them a step closer to being painted (and also moves them from the "to assemble drawer" to the "to paint drawer").

Posted by Stuart Bannister at 15:36 No comments:

My least productive year of blogging; after a decent start it all tailed off and I moved away from this hobby and focused on other spare time activities over the spring and summer; namely cycling and reading. I think taking on the challenge of painting an entire unit in one go, completely put me off this hobby and is a lesson learnt; small and varied tasks are the way forward. However the year finished with a flourish as I re-found my love of the hobby and worked through quite a few models and projects and enjoyed working on them too. Find that motivation in whatever form it takes!

It was the completion of my 3rd Edition Chaos Allied Contingent that had finished me off halfway through the year, so to start off with, here is a few shots of them; The Chaos Dwarf Renegades: 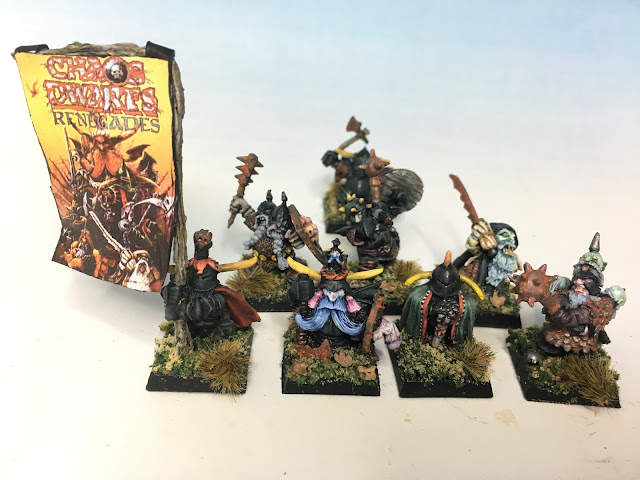 The Chaos Ogre to accompany them 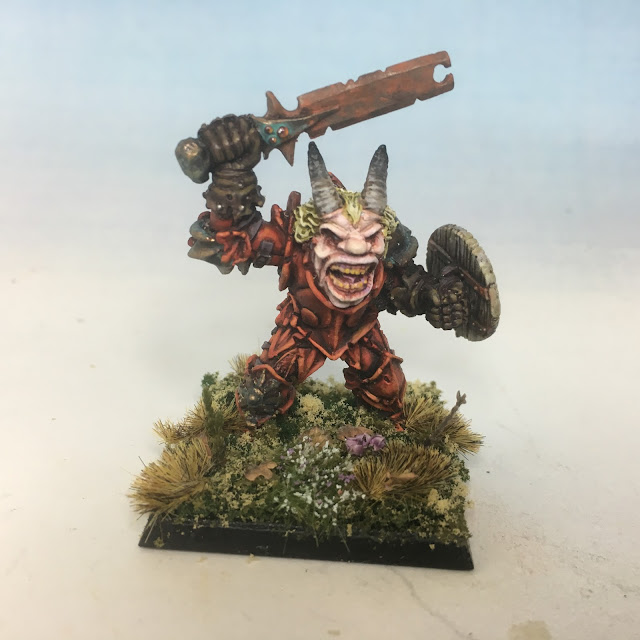 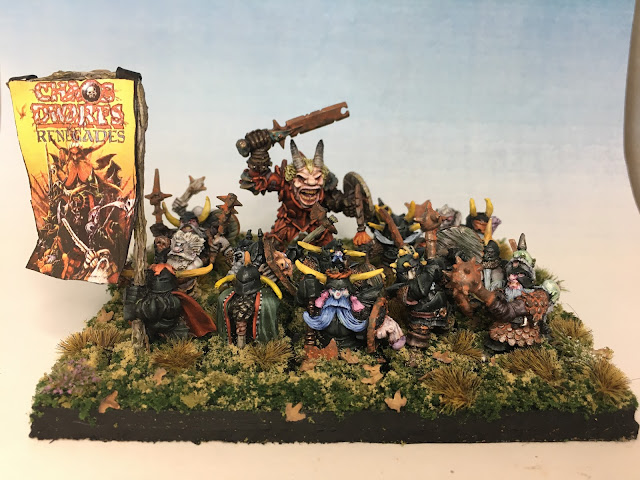 And the entire contingent with commander, minotaurs, centaurs and other chaos dwarves: 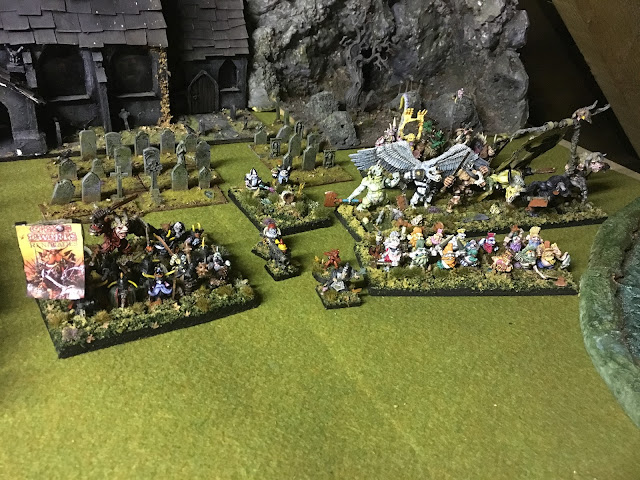 My rehabilitation back into the hobby began where it had all started anyway - 3rd Edition Orcs, namely the commander and bodyguard that were painted up for my Greenskin Combat Card Collection. Painting two miniatures in a go is obviously my limit and it was nice to go back to the familiar green/brown skin tones that I know so well. 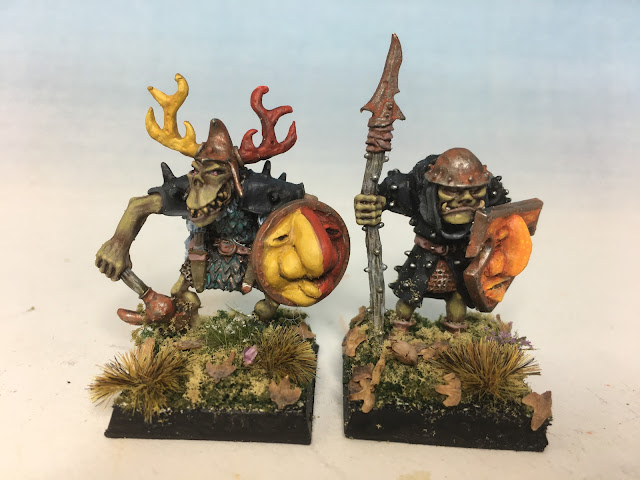 With these done, I decided to delve into my unpainted scenery collection, so I could be a bit more creative in putting things together, rather than just painting. So I re-discovered my Renedra gravestones and added some undead 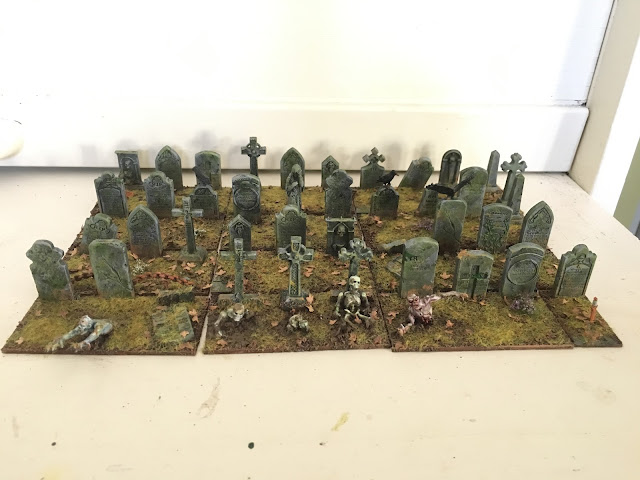 But I did not want to lose my mojo too quickly again (after the depressing, but relatively fast painting of so much weathered stone) so rapidly returned to another greenskin for Orctober. This one involved a conversion so I could remember the joy that that brings me within the hobby. A bit of greenstuffing and problem solving later, a goblin was ready to paint which could be painted in a short period of time. 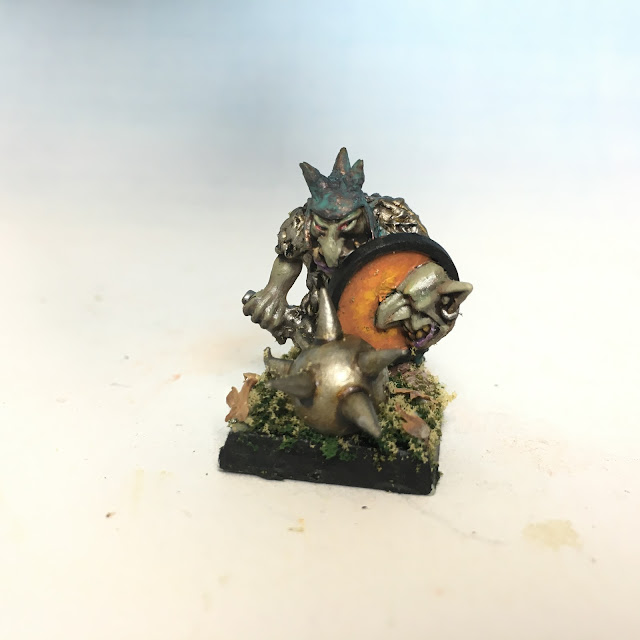 I had the bug again and now entered quite a frenetic period of production, the GW Garden of Morr set was next on my list to accompany the gravestones. I went for speed on this set: 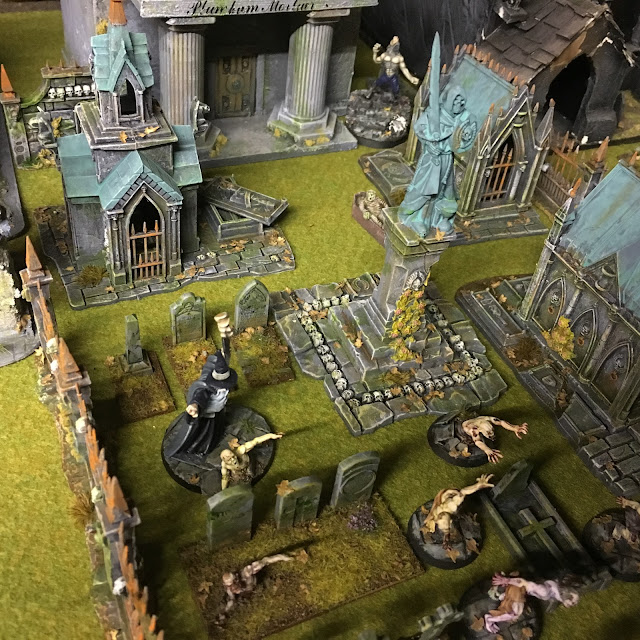 I was also motivated in getting this scenery added to my growing collection and display, as seen here: 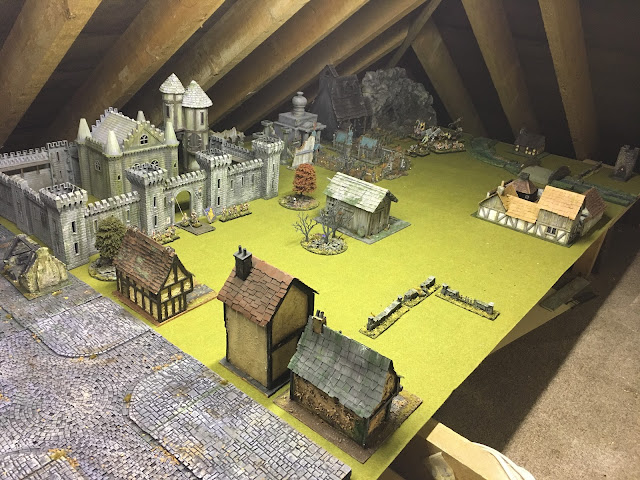 A diversion attacked me from my "drawer of unpainted miniatures"; some npcs from Otherworld: 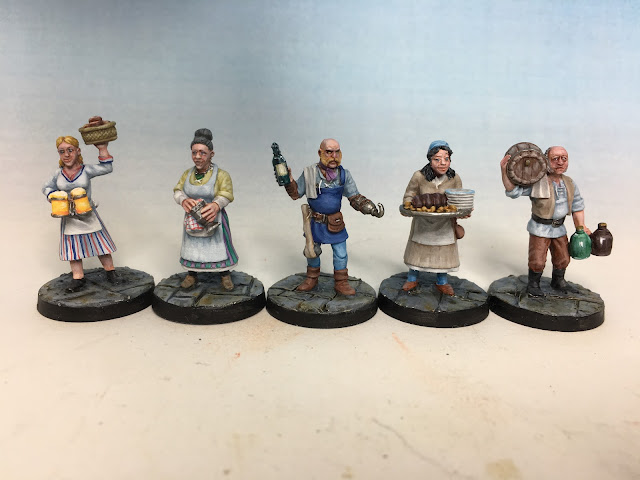 Followed swiftly by a couple of unreleased Citadel Wizards that I picked up from BOYL many years ago, to act as other npcs. 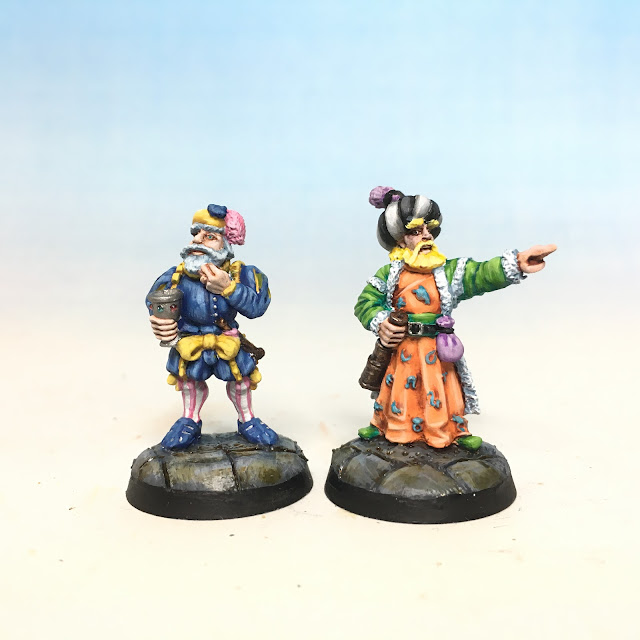 And then I realised to my horror, that I had another BOYL miniature sitting in that same drawer, unpainted: 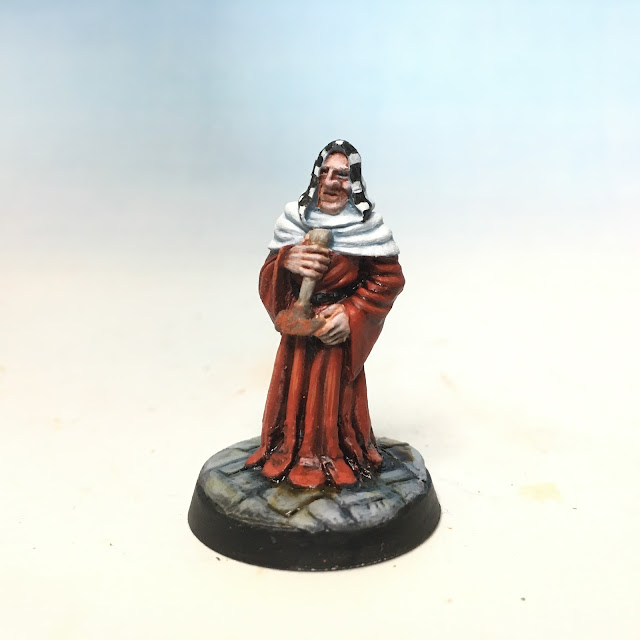 Having painted these npcs, it gave me a chance to break out the old scratchbuilt, modular dungeon scenery and set up a tavern interior scene. These photoshoots, I have remembered, are a very motivating factor in the never-ending quest to "get stuff done" 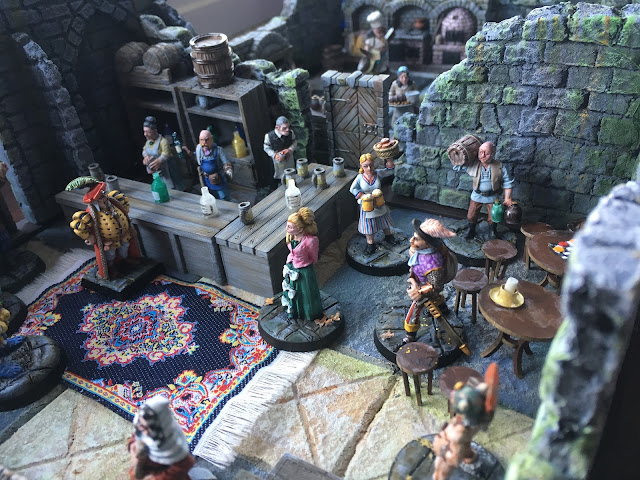 And then a chance visit to a gaming store introduced me to the Star Wars miniatures. Greedo was bought and painted in the same day. That is a rarity! 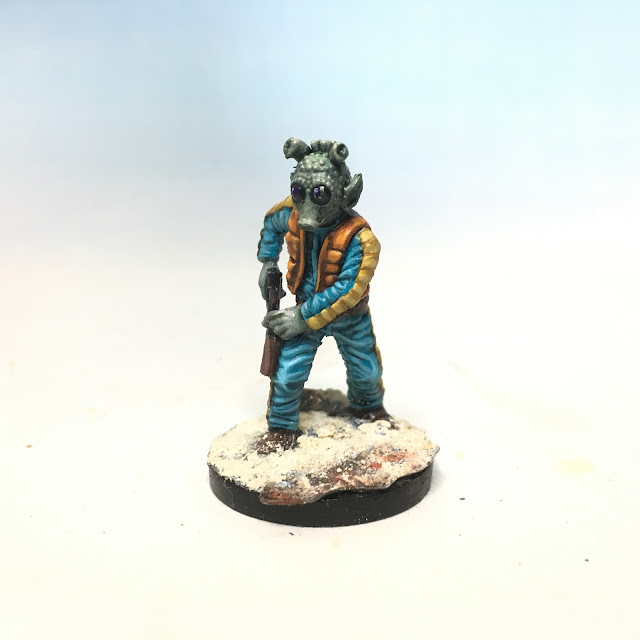 But of course such is the mind of a hobbyist, that he needed a context and some Mos Eisley buildings were scratchbuilt from junk and painted 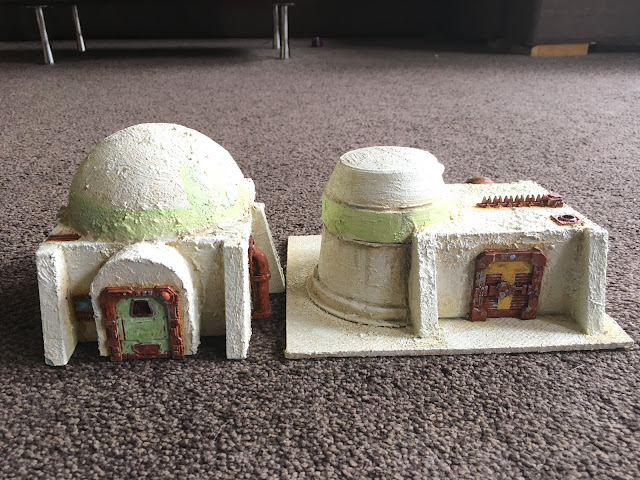 Phew! A glance at my blog reminded me that I have some (read many) unfinished projects on the go, one of which is a determination to collect and paint all of the Frostgrave Bestiary. A Reaper Bones snow leopard and a Citadel boar were then finished. 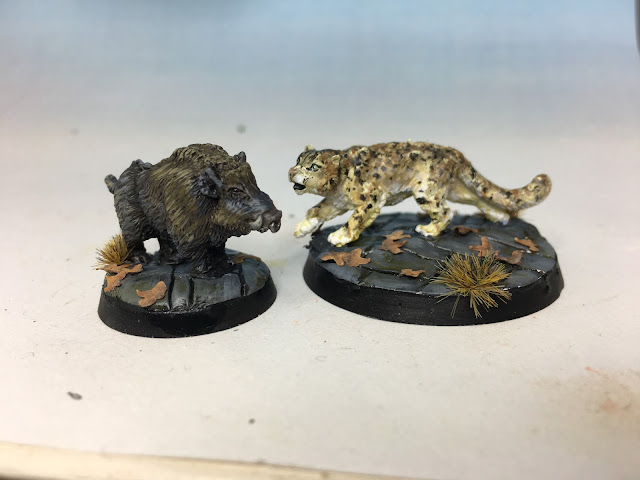 And then finally, in December, for DeadCember, I completed a Scibor Necromancer that had been sitting around in the "models to be assembled" drawer. 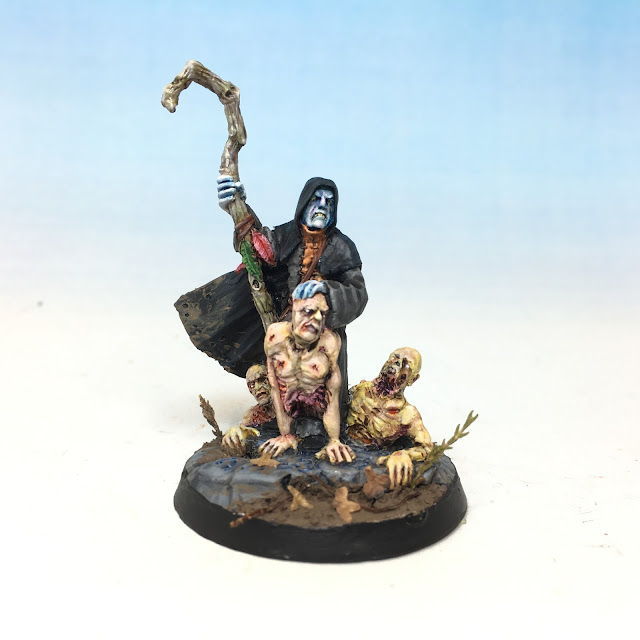 There is a satisfaction in starting to empty out both the "models to be assembled" and the "to be painted" drawers. But ironically (having finished with a Necromancer) new minions seem to have appeared with a combination of different complexions from matt resin, dull and shiny lead and some grey plastic in both drawers, replenishing them with "new tasks" for me to take on, control and bring to life in 2019

Posted by Stuart Bannister at 17:04 No comments:

The Enduring Legacy of the Realms of Chaos

Remember those amazing illustrations from the original Realms of Chaos books, by artists such as Adrian Smith, Paul Campbell etal, the ones that provoked so many ideas and fleshed out some of the possibilities and potential within 3rd Edition Realms of Chaos? I still love looking at them today and often feel inspired to try and convert my own miniatures based on the characters depicted within them. But I don't have to so much anymore because the Games Workshop of today (which has more recently seemed like quite a different beast as to what I grew up with) has released some models that are so obviously steeped in and inspired by some of those very illustrations I alluded to earlier.

I rarely venture onto the GW website, so I am somewhat behind the times, but I saw someone else had painted this model (Sloppity Bilepiper) and assumed it was a conversion, but no, this is a bonefide GW release that is clearly based upon some illustrations from GW of the 80's, specifically the Realms of Chaos. I just had to buy it (and make a bit of an adjustment to make it fit a bit better with those illustrations and lose the, quite frankly, ridiculous staff); 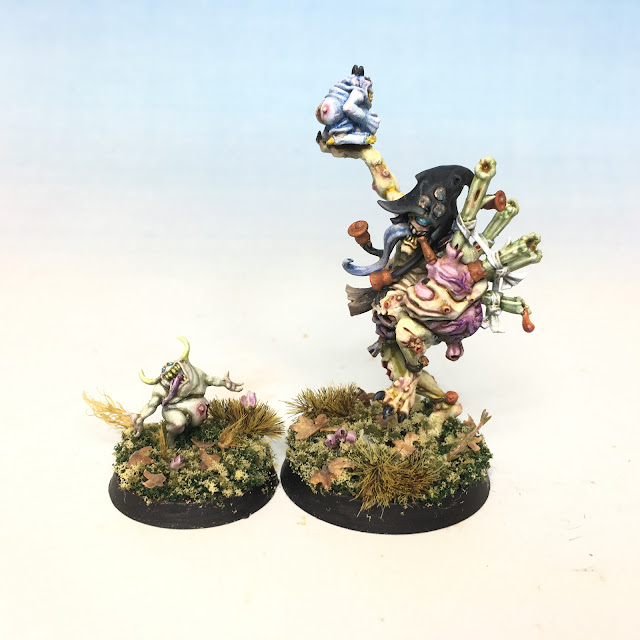 The musical element, the dynamic, dancing poses (especially the Nurgling) are just so evocative of those early illustrations, especially the Dance of Death. The older Nurgling I added to Sloppity's hand is a reference to that era. 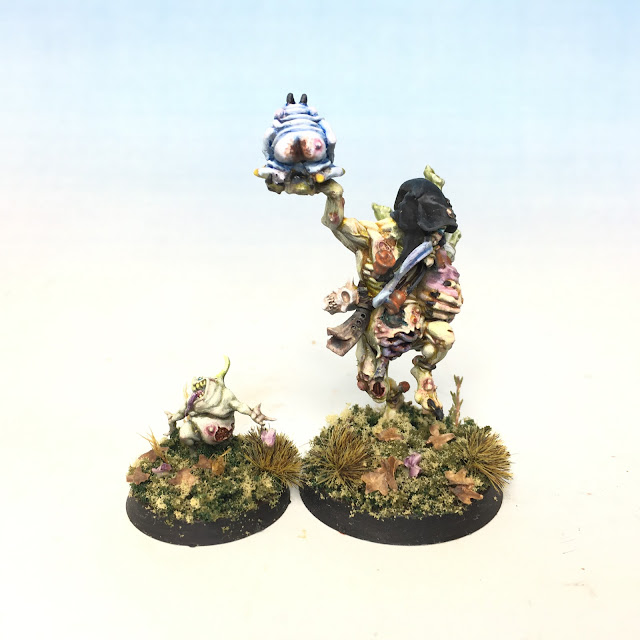 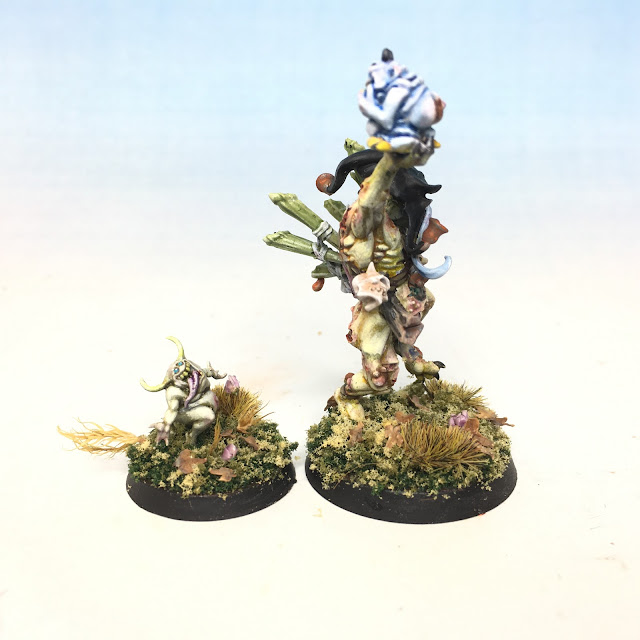 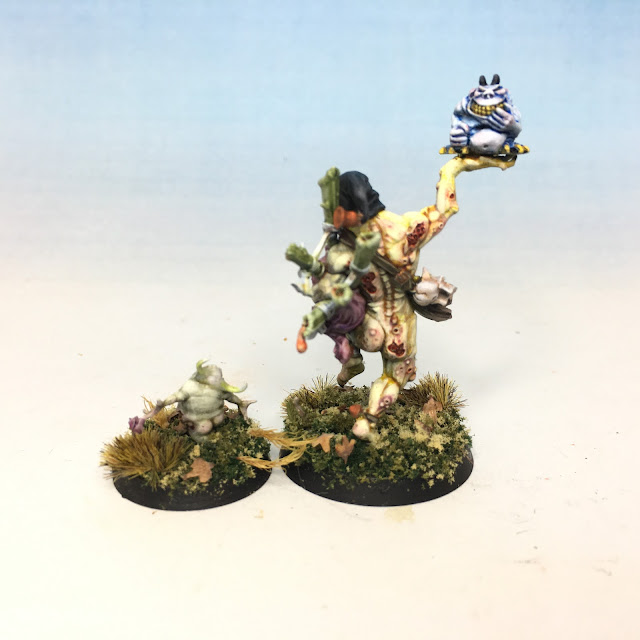 I had forgotten about my scenic photography backdrop, so I dusted it off (I actually had to and was surprised by the versatility of static grass) and used it again here: 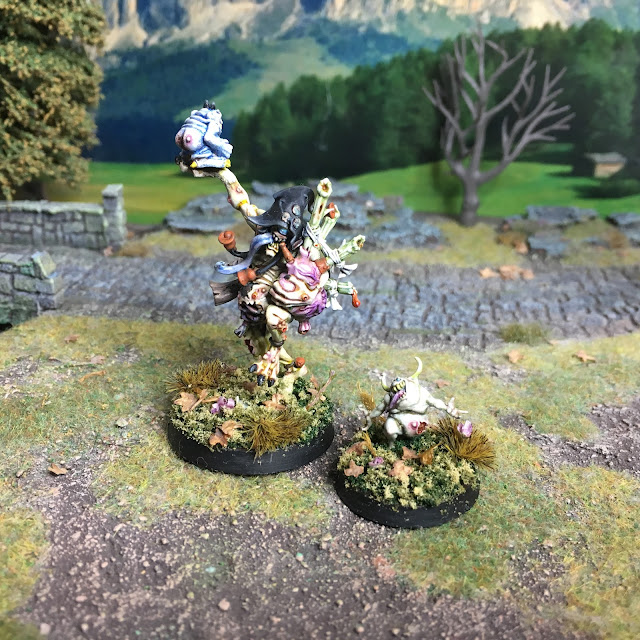 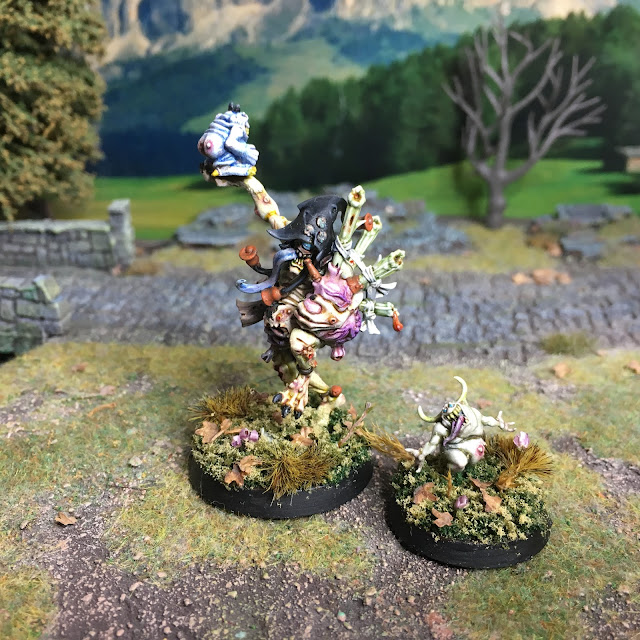 Before converting and painting this modern model, I just had to reach for my Lost and Damned book and look for the specific illustrations that I saw the link to in these sculpts. The two images were by Adrian Smith and Paul Campbell from the Nurgle pages in the Lost and Damned Realm of Chaos Tome, specifically the Dance of Death and Nurgle Calvalcade pages. Have a look: 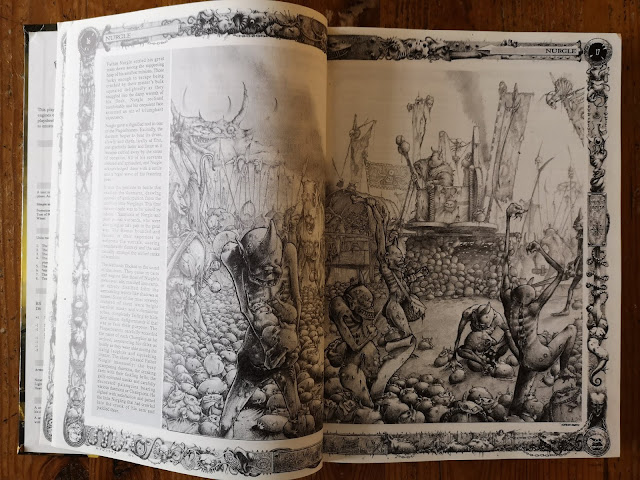 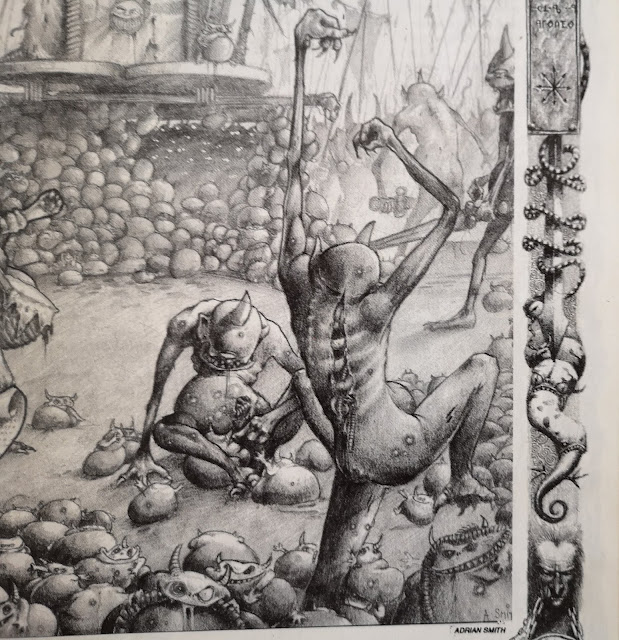 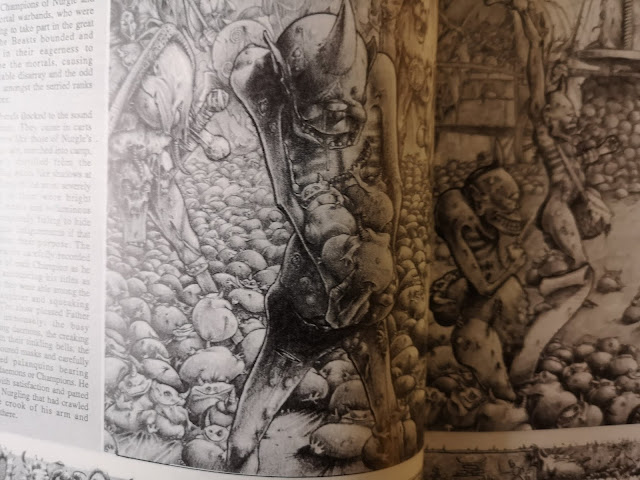 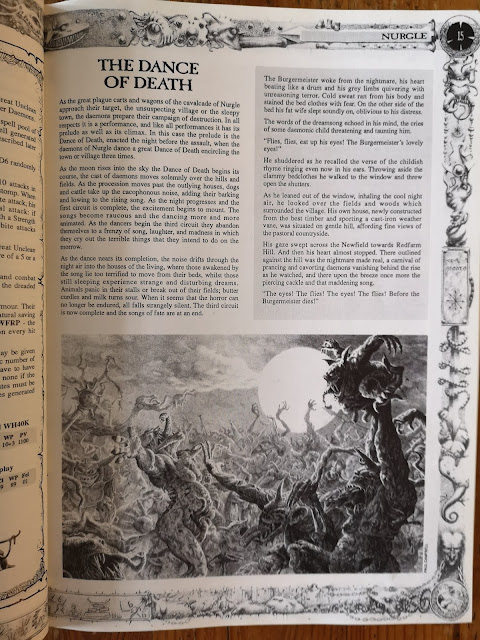 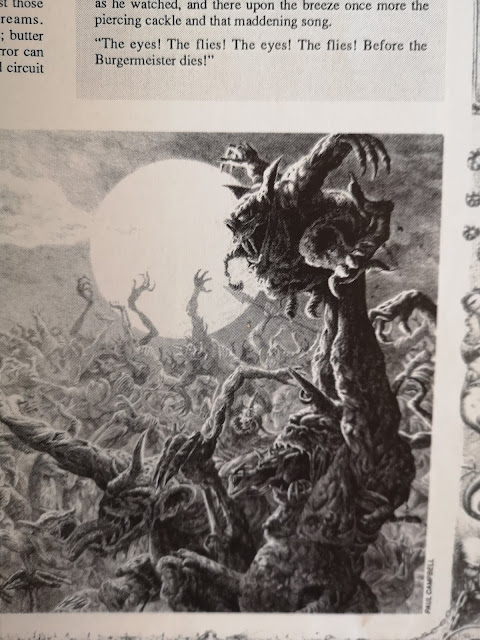 So, as I was researching some of this post, I discovered that GW is releasing a game called the Realm of Chaos. It's not aimed for me, but it is nicely reassuring that my favourite era and output of model miniatures is seeing something of a revival for a new generation of gamers/painters. I'm looking forward to some new plastic models to paint and then sit alongside my original lead ones and hope they all are happy lined up alongside each other.

Posted by Stuart Bannister at 14:56 No comments: