The Shadows of Rensburg - NPC models from BOYL 2014

A few people have asked about the NPC models I used for the BOYL Warbands narrative game, set in Rensburg. Well they are all from a blog I started many years ago, where I was creating an Empire army through a narrative; you can read and see it here:

So for the Oldhammer day I decided to unearth them from the attic and use the scenery and some of the models to help create and GM the Shadows of Rensburg Warbands game, which was thoroughly enjoyable (and a success, I think, as my first ever GMing..!):

So here's a further selection of photos of some of those models used (you can see my leaning to classic citadel/oldhammer 5 years ago and inspiration from Heironymous Bosch's artwork): 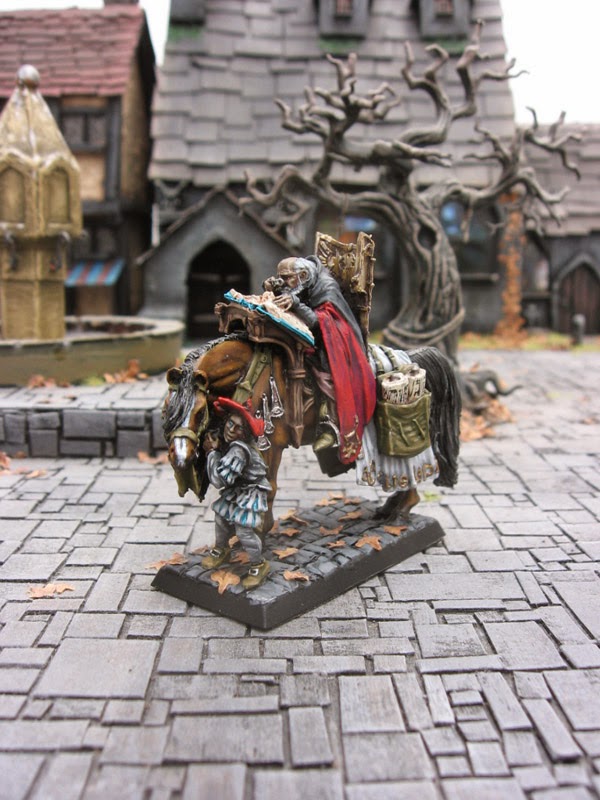 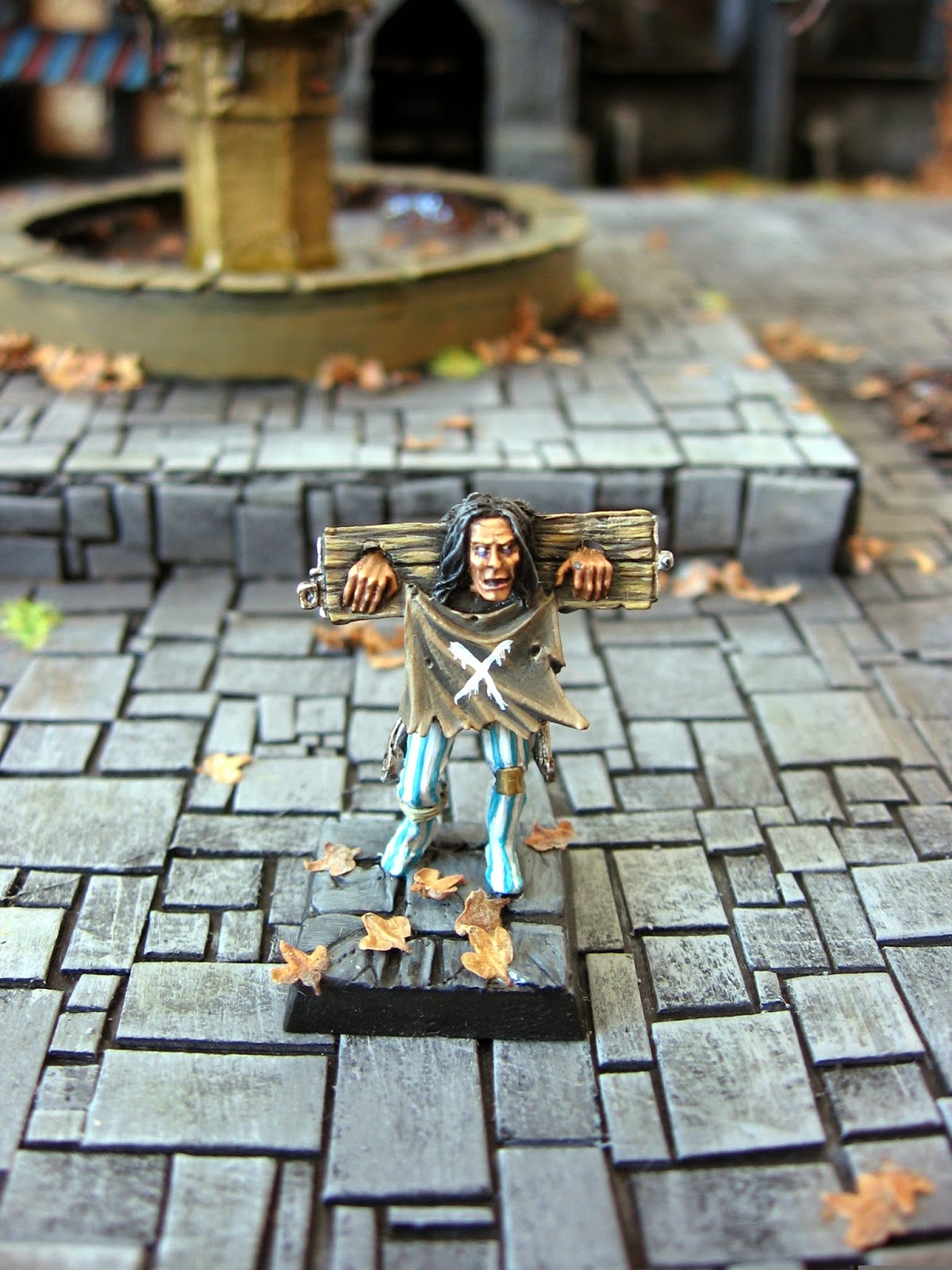 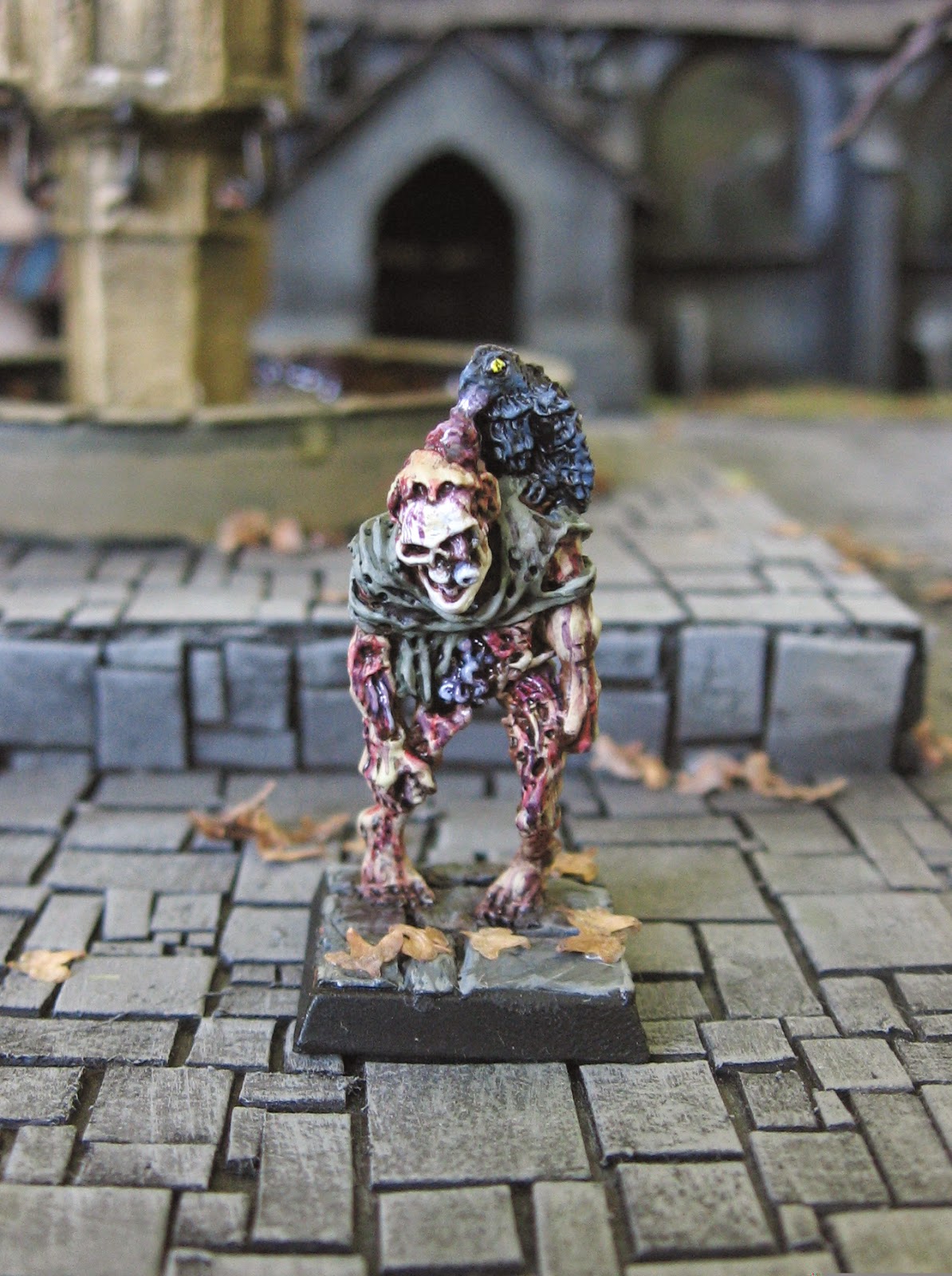 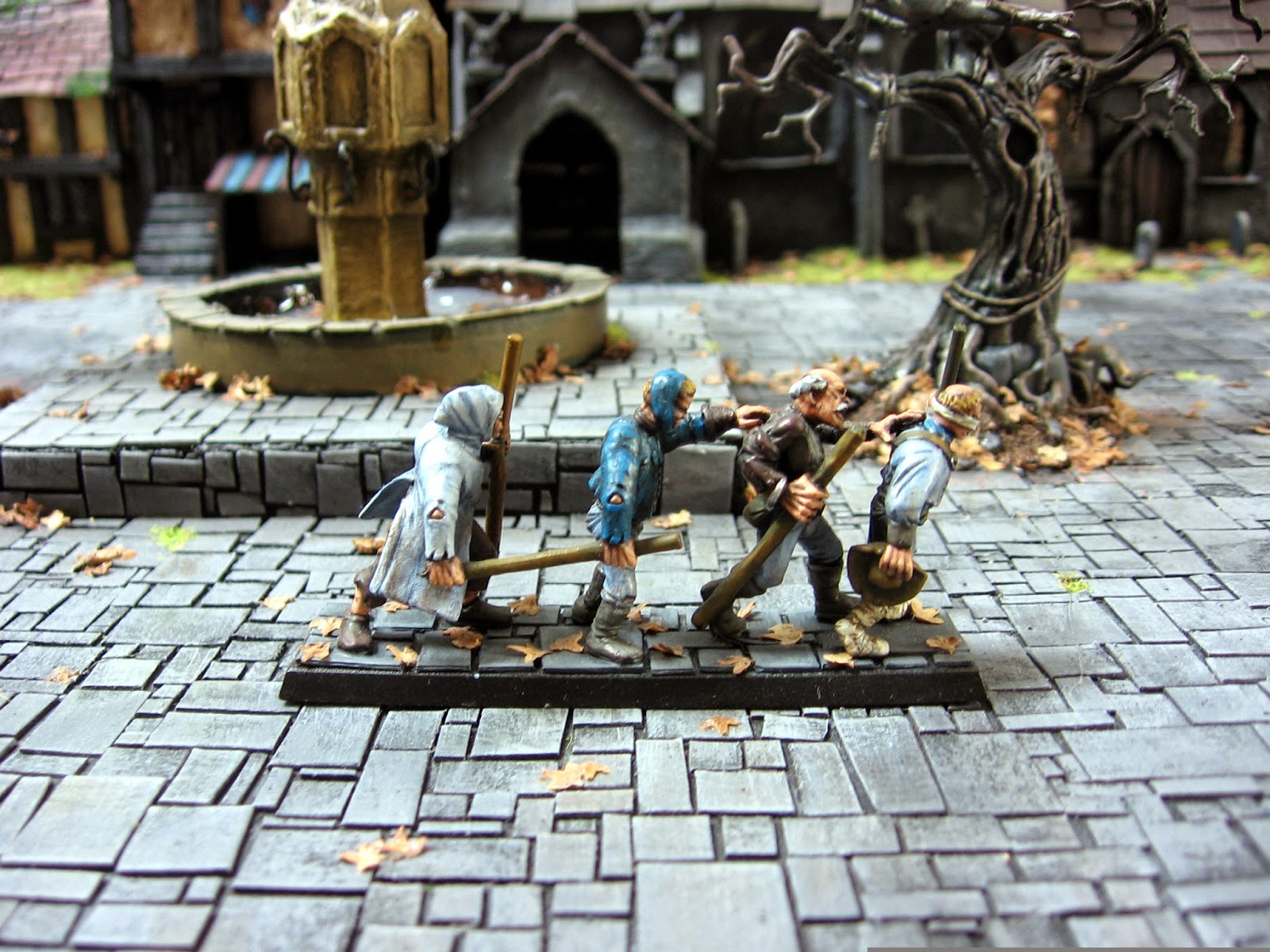 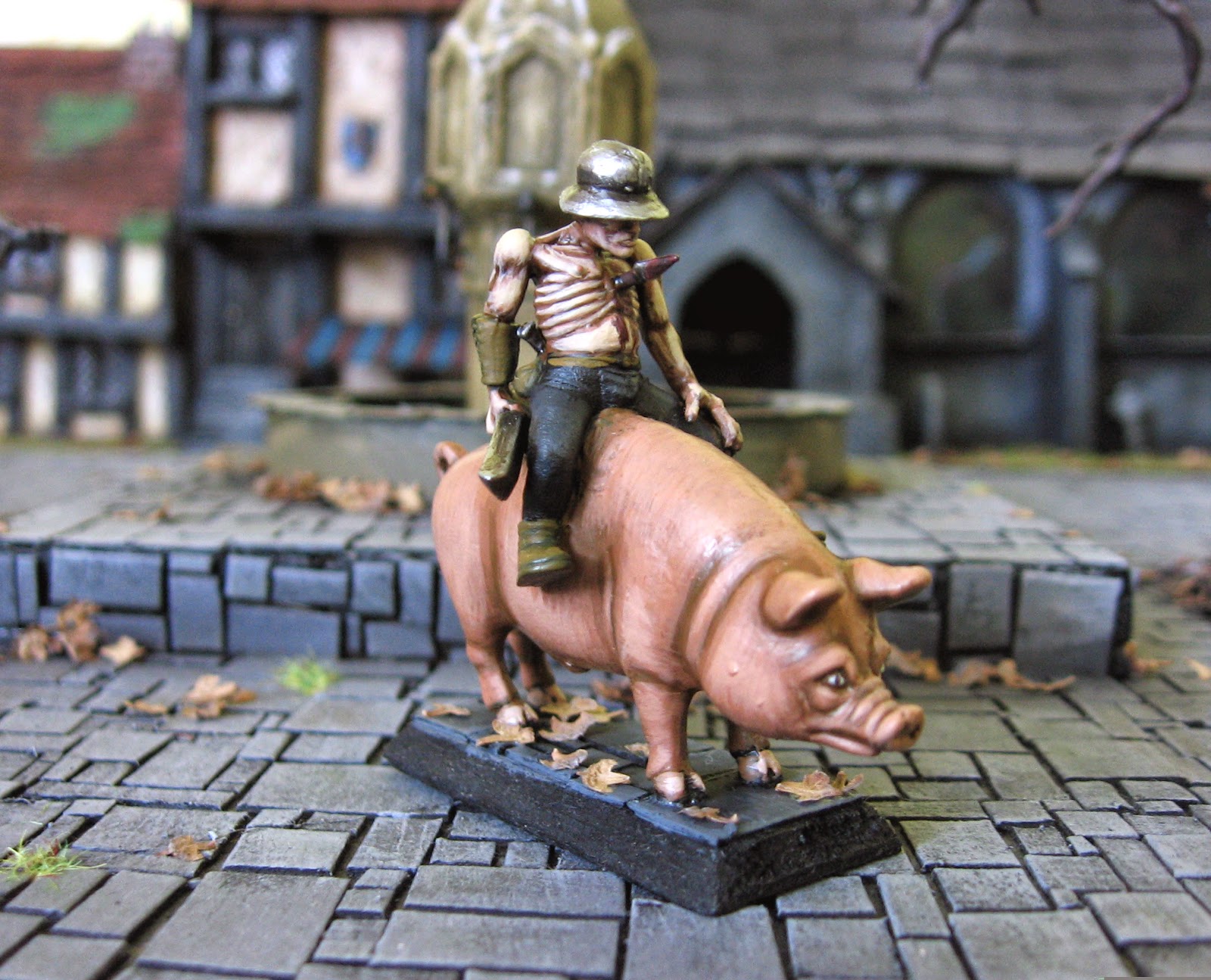 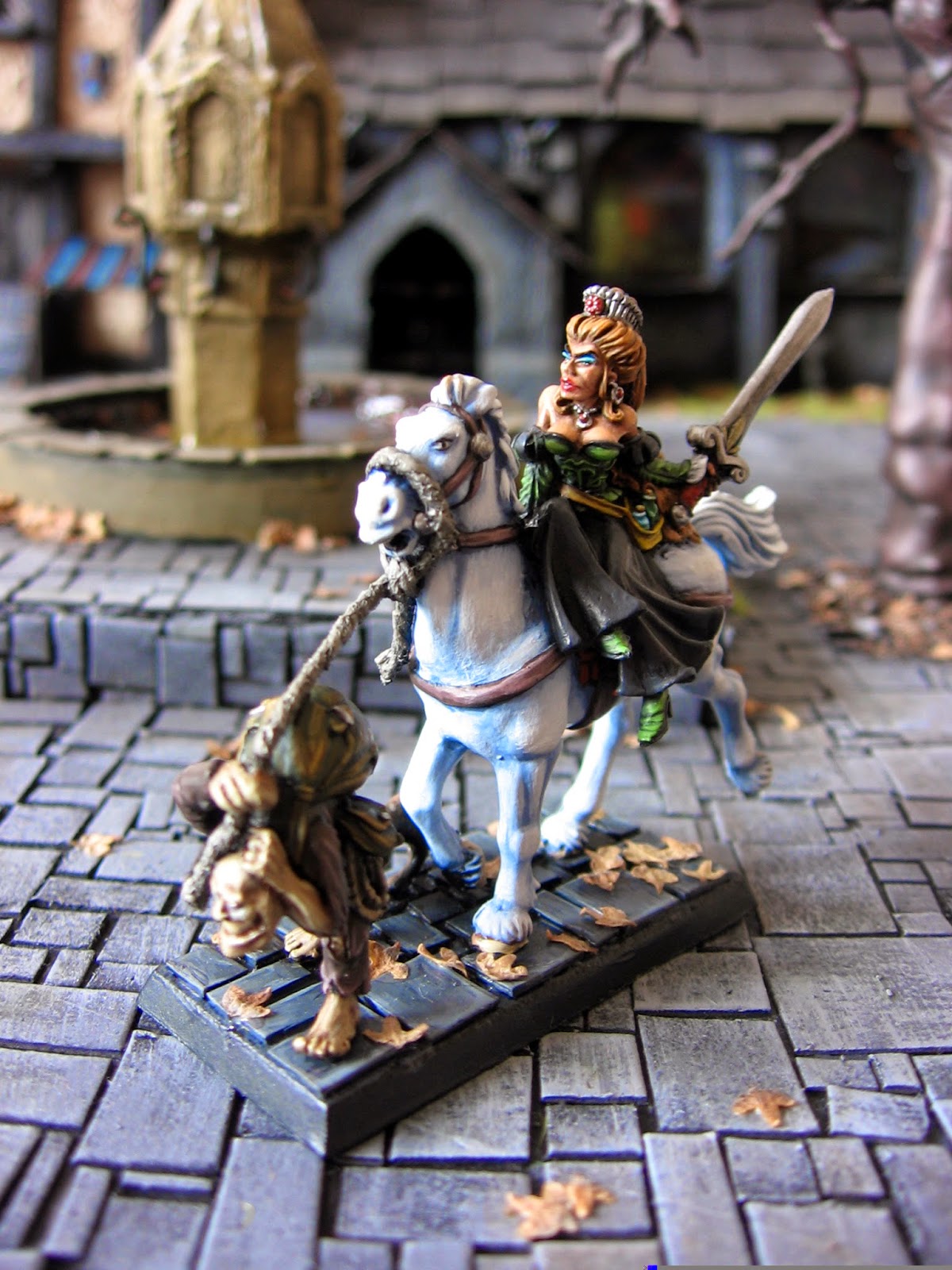 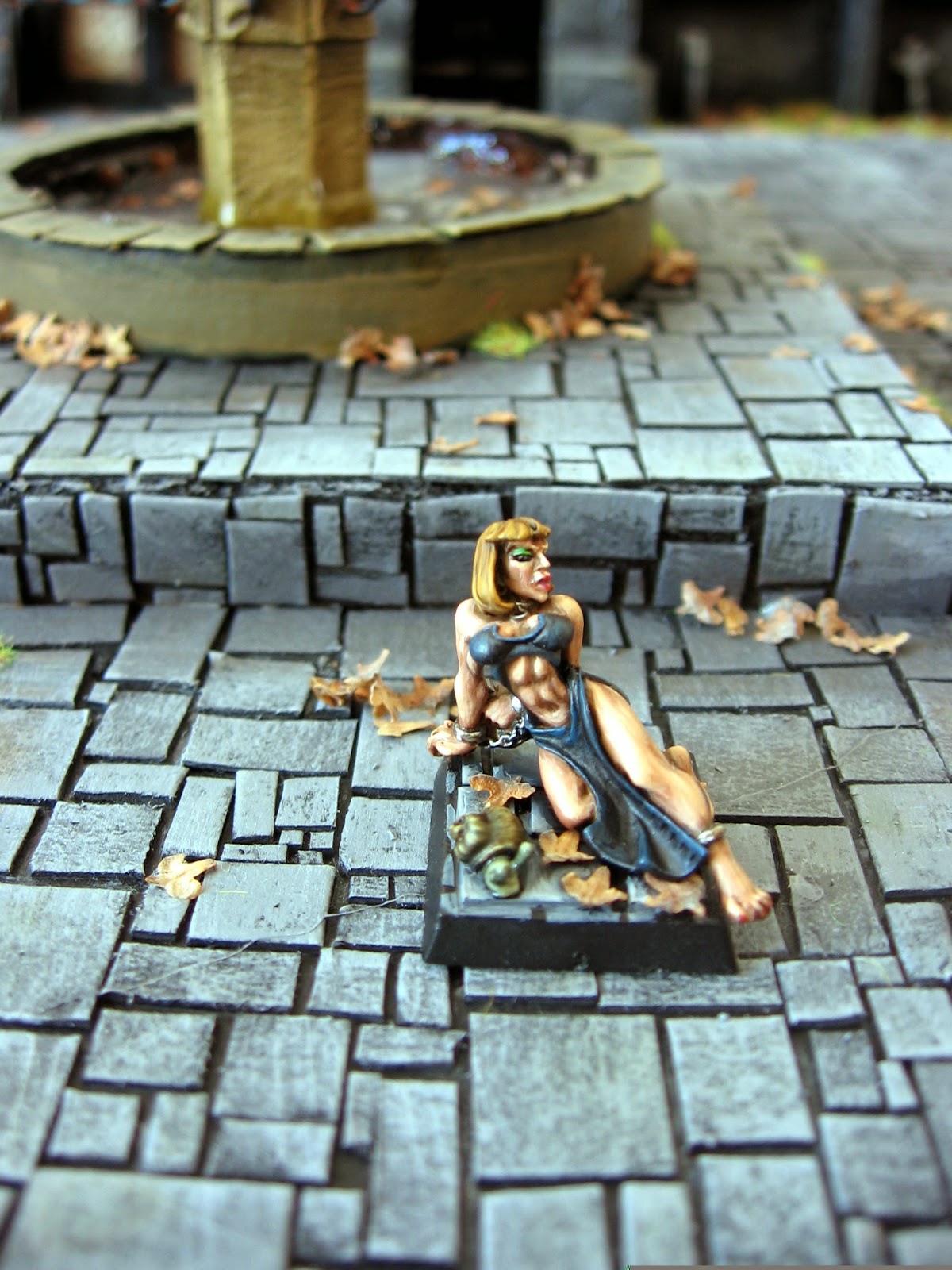 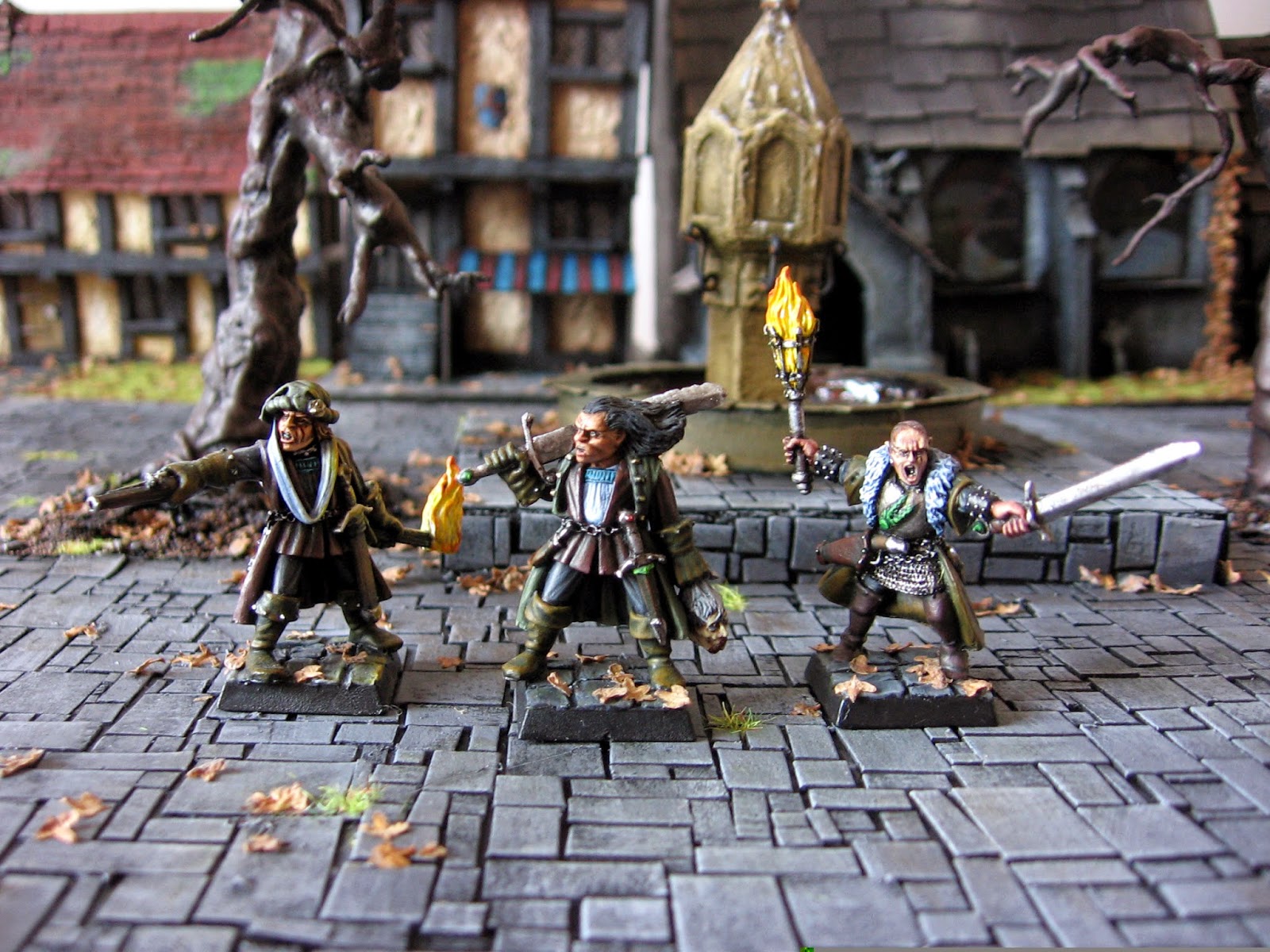 Maybe one day I'll get back to finishing this project.......

Posted by Stuart Bannister at 13:21 No comments:

What a great weekend - so many amazing old miniatures, scenarios, games and of course Oldhammers at the equally fabulous Foundry. The epic Siege game will be well documented but here I show my small contribution to the weekend's gaming - the narrative scenario called the Shadows of Rensburg:

He awoke amongst a bed of dark leaves expecting to feel groggy, but instead he felt surprisingly alert. The recent memories came flooding back to him, the battle for the town of Rensburg and the spirited defense of the townsguard, but it was the awe and power of the Chaos invaders that left the greatest impression, their incredible strength, swordsmanship and their desire, their unrelenting will. There was no guilt in the admiration, he admired some of his fellow soldiers and their bravery in the face of such power, but the outcome was never in doubt; only the humans fled, the invaders only poured forward. But how had he survived, why was he spared? He looked out between the branches, onto the ruins of Rensburg and the bloody battlefield strewn with corpses upon which the birds were now circling. He saw shadows moving. There were others out there, he could sense it, others like him. What did that mean, pure kinship with fellow survivors? He didn't think so. Something had happened, some changing of himself and the area which had once housed his garrison. There seemed to be a fizzle in the air, whispers in the clouds, a sense of expection. Poised on the edge of the forest he knew he needed to be patient. He looked down at his axe, rusted; his hands clutching it had a tinge of blue, the skin beginning to peel away. His belly was exposing his guts, displaying the beauty of his previously unseen insides. He felt the wonderful texture of the boils on his chin. None of this surprised him, he was ready......

The set up with all the NPC's present in and around Rensburg (the Highlanders can be seen on the left and VanLoon's Khorne warband at the top right): 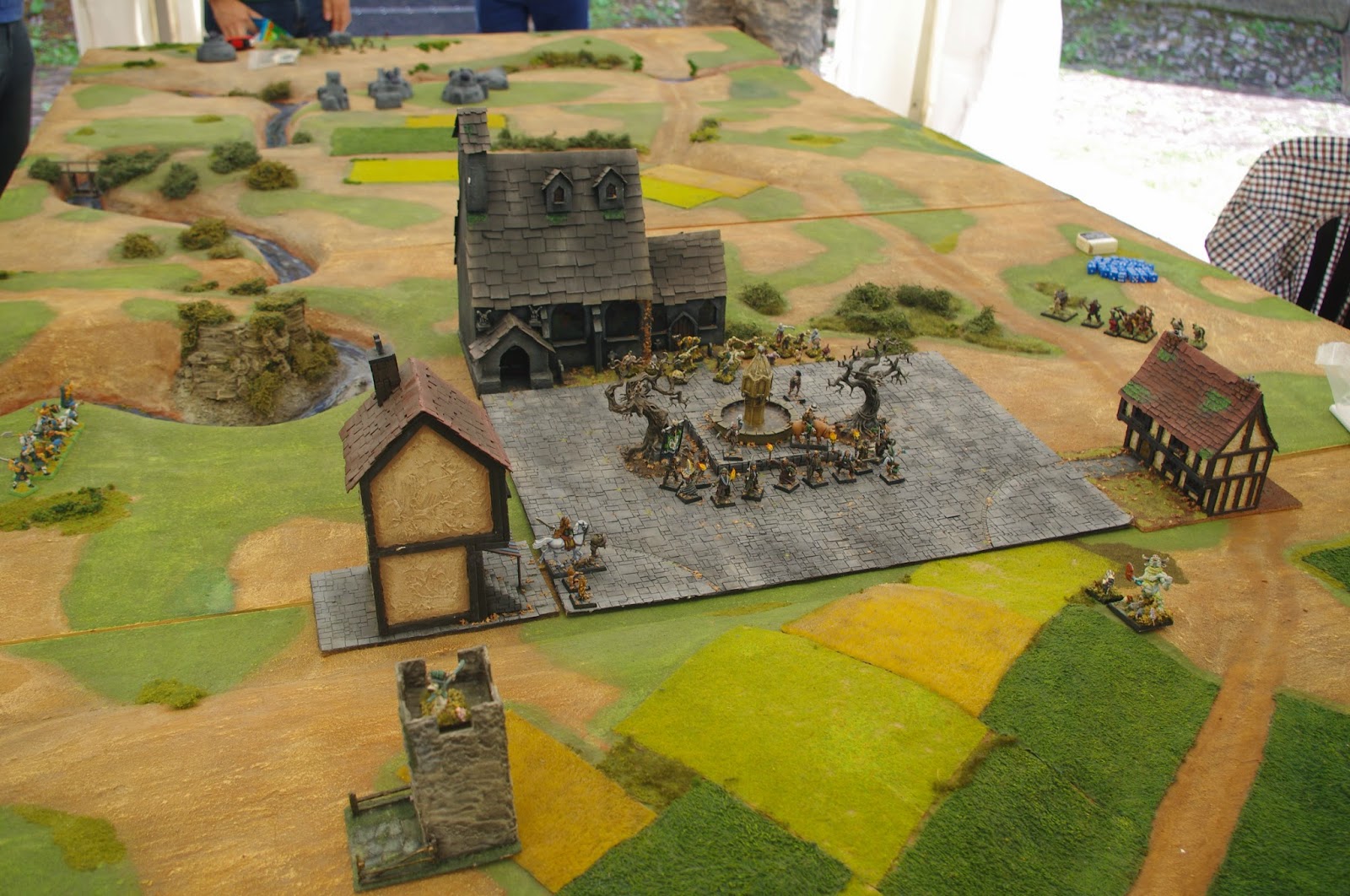 Warlord Paul's Human Adventurers traverse the river over the bridge, but are attacked by a stupid troll. They eventually kill him, but the troll has a death spew and wounds the hero. On the troll's corpse they find a magic ring which unleashes a Plaguebearer (under control of the hero's WP): 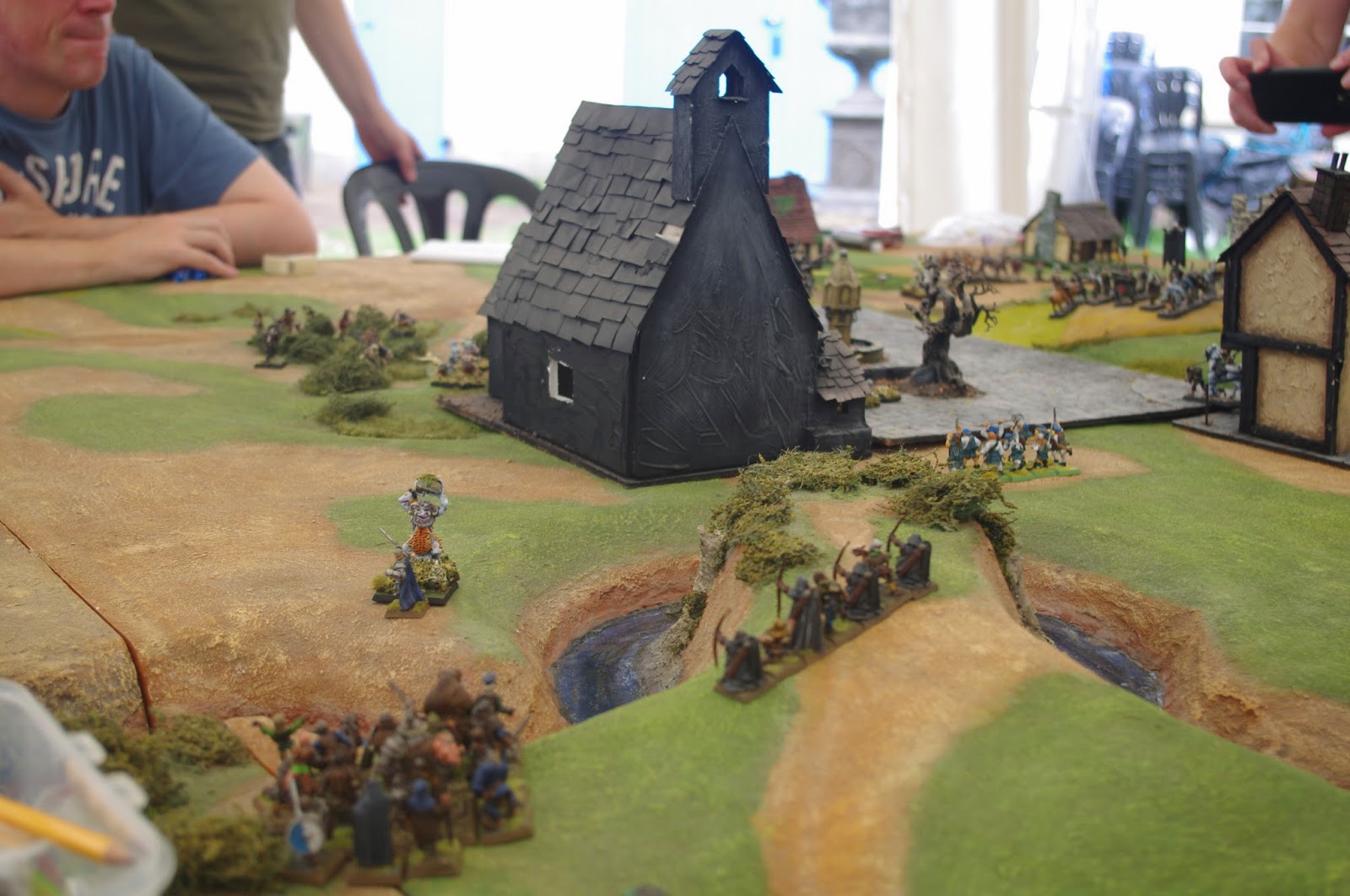 Meanwhile the Highlanders are attacked from the rear by a group of Giant Slayers, who themselves are looking to kill a bigger prey - they hoped to meet their match in a Giant, but were slain by a tossed caber and the ensuing combat with the Highlanders! Pah! In the background you can see the Zombies advancing to the smell of blooooood.. 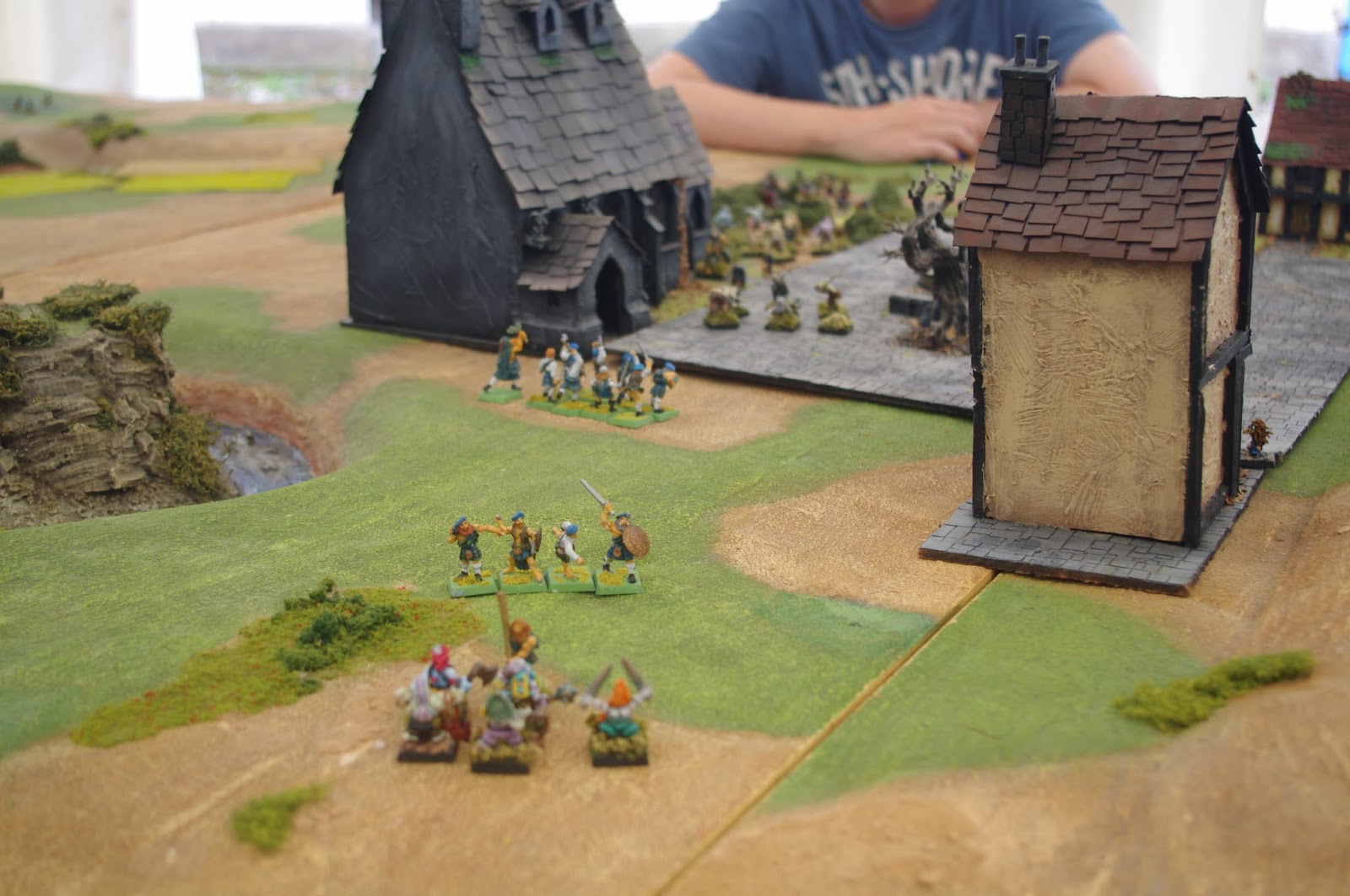 Vyper's Khorne Warband warily approach the town square, a feeding Minotaur and Chaos Hound can be seen and are quickly despatched from a combination of heroic goblin archery and some very tough beastmen. In the background you can see the Witch hunters and townsguard panicking towards them from the Highlander Priest's blesing: VonLoon's Khorne warband approach Rensburg through the scrub, where they are met by some Goblins. The Illusionist shaman confuses them with the Illusion of an Orc, resulting in a failed charge for the Chaos Dwarf and his human mercanaries and the Goblins halt the advance for many more turns with some resilient rolling! The Chaos Warrior and Ogre continue unabated towards the Zombies: 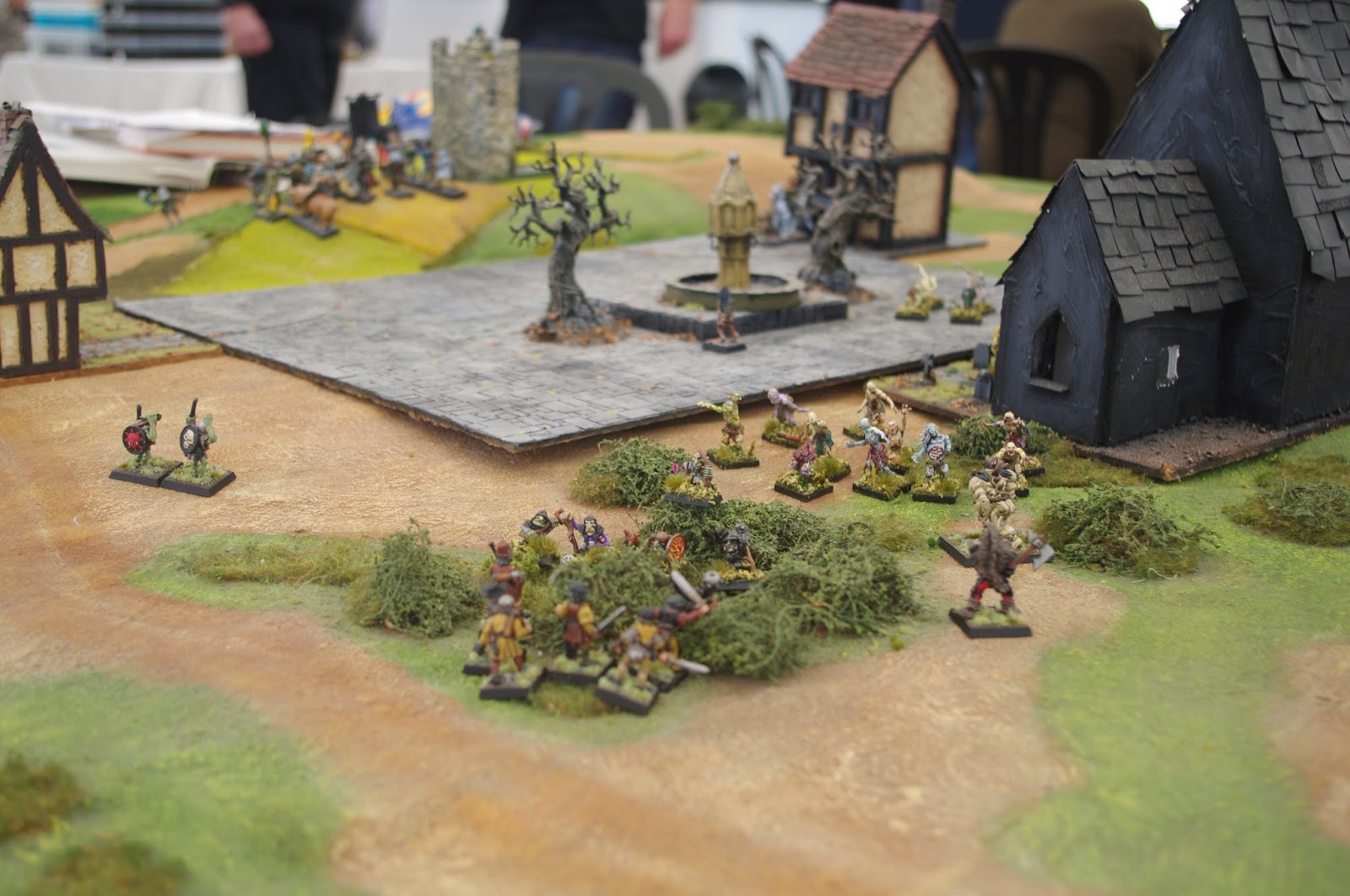 The townsguard and witch hunters rally and prepare for a flank charge from the tough beastmen and their Chaos Dwarf leader. The ensuing combat was brief and bloody, with a comprehensive victory  for the warband: 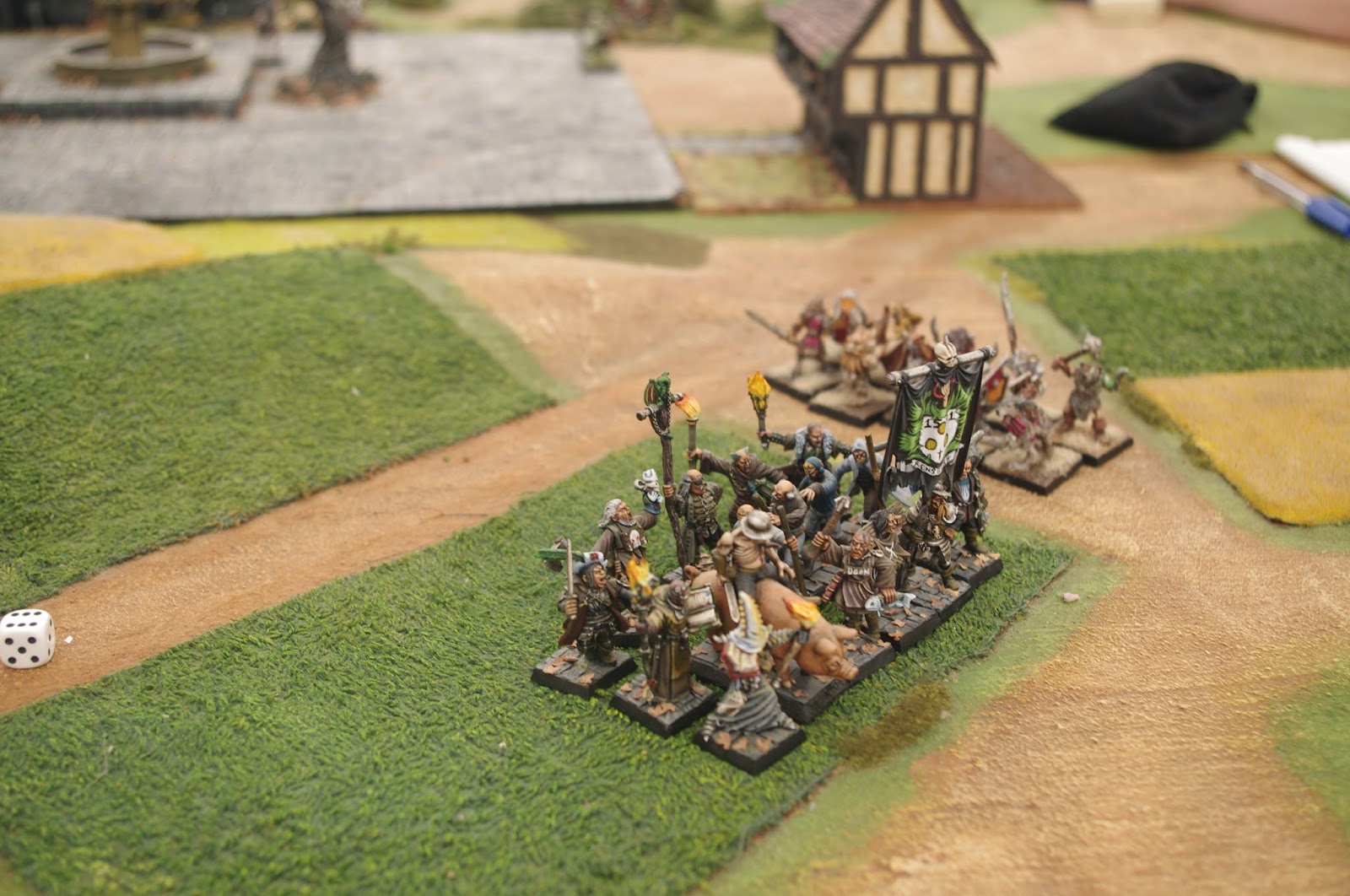 The Highlander's approach the tavern and the pretty ladies outside. They reject the overtures of the girls and instead choose the tavern and proceed to get pissed (and poisoned) on the local brew, leading to 2 turns of stupidity! 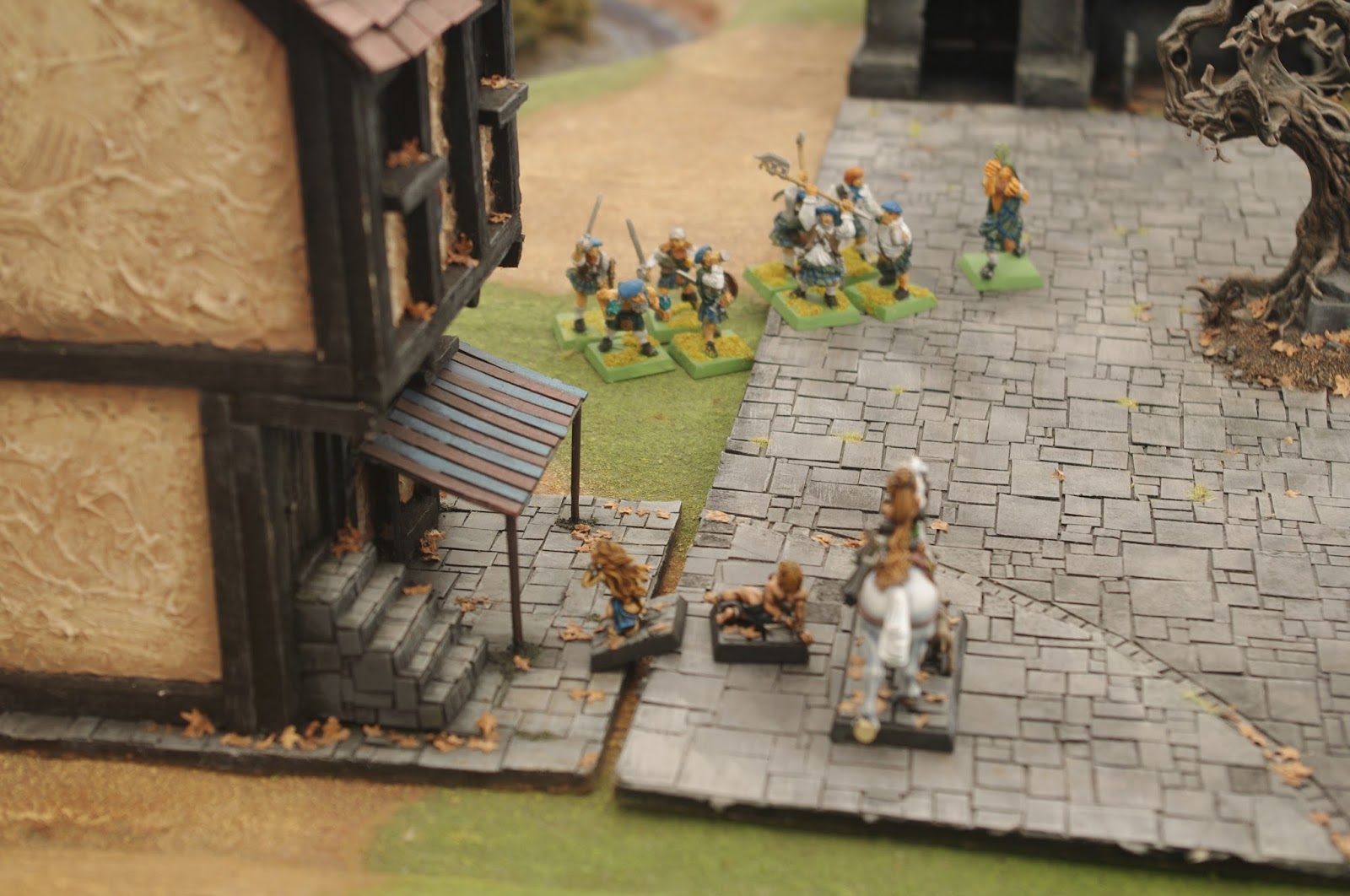 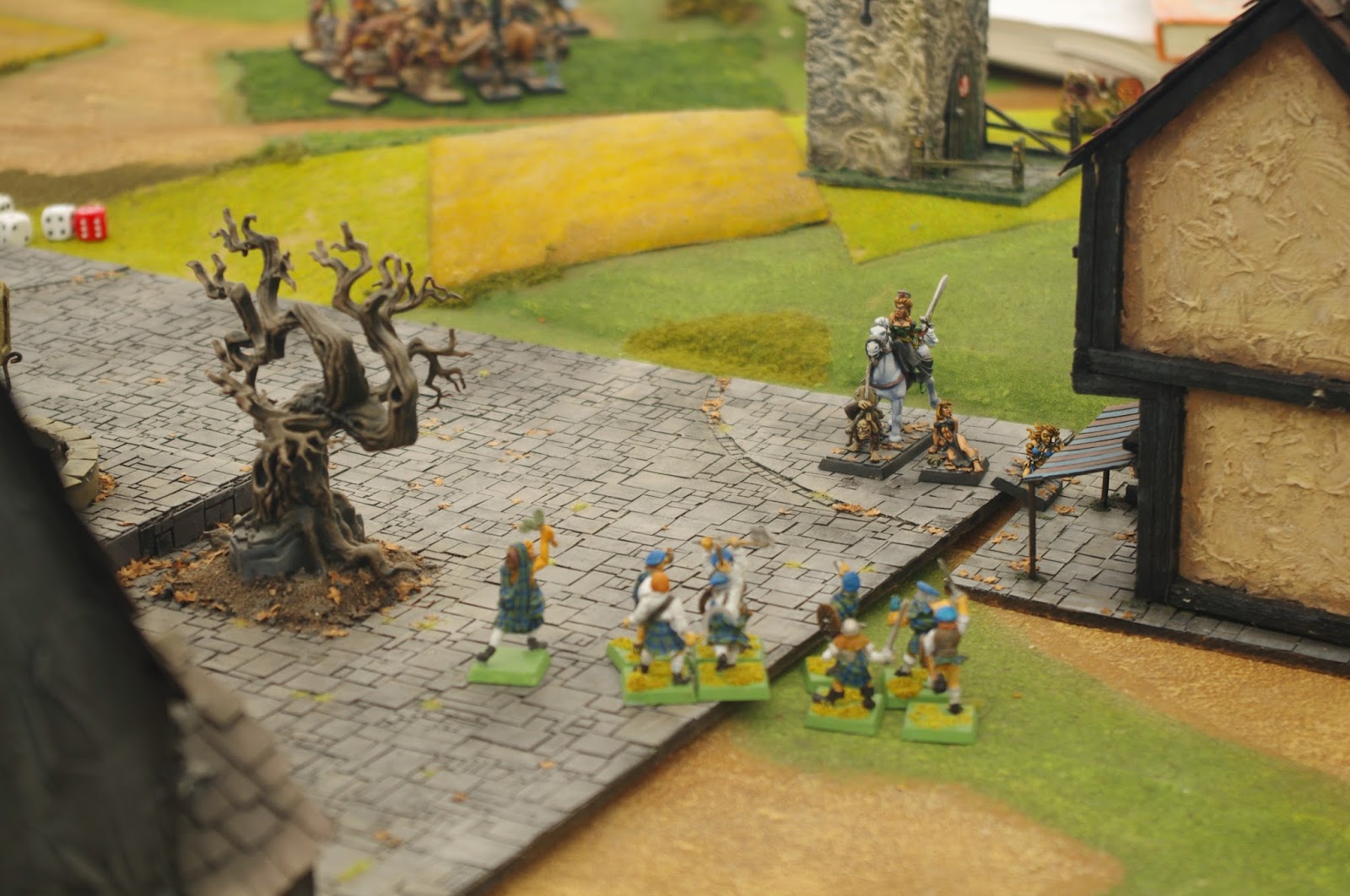 Meanwhile Warlord Paul's warband ransack the church, awakening a group of skeletons. They also find a magic sword of Parrying! The skeletons are eventually overcome. In this picture you can also see a pair of wandering Plaguebearers (the one under the control of Warlord Paul killed VanLoon's Chaos Warrior and turned him into the second plaguebearer!). Also in this photo is the wounded mutant ogre finishing off some Zombies and the mysterious Nurgle Necromancer lurking in the graveyard. 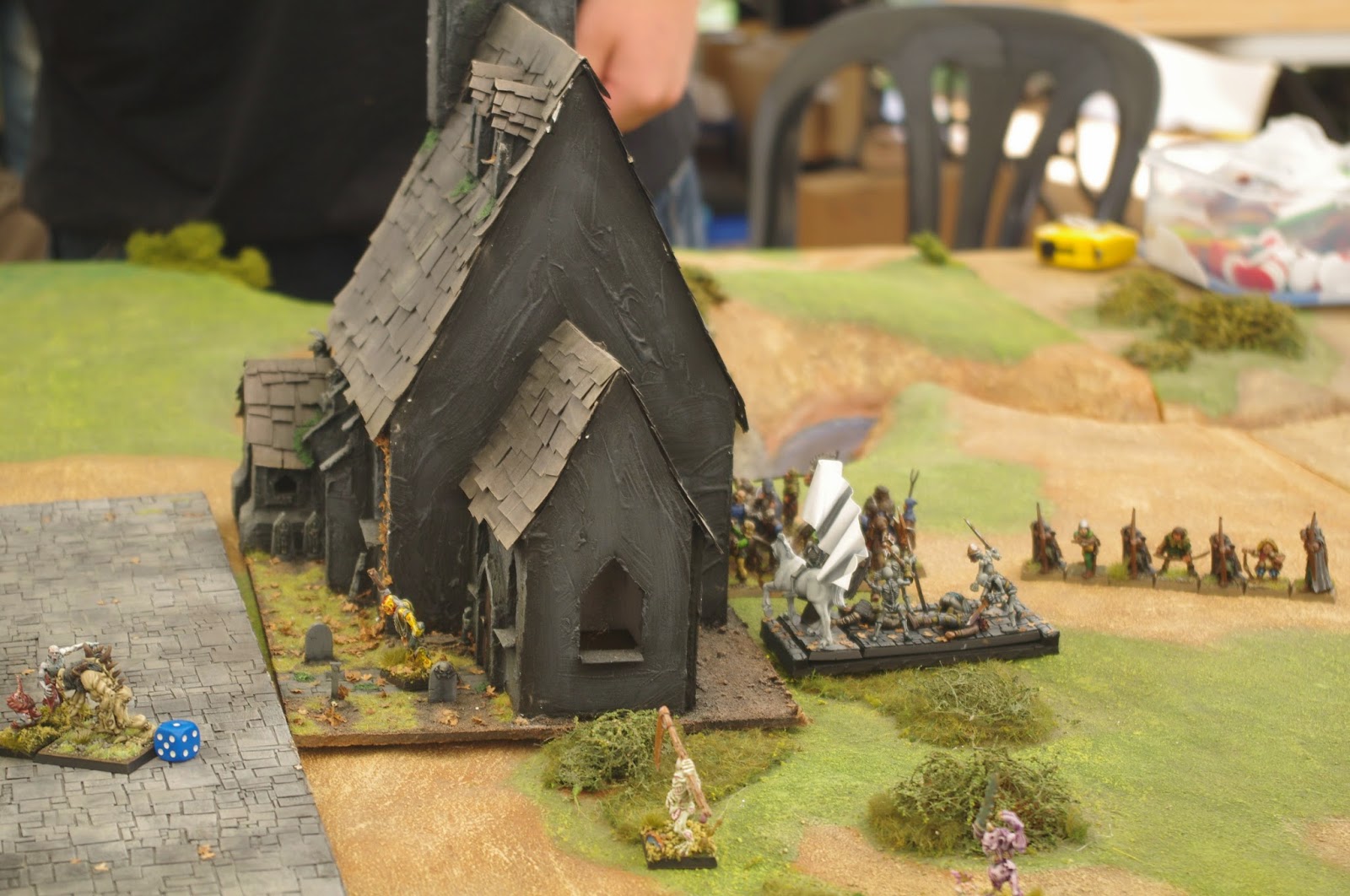 [A few missing photos here as the action hotted up and I forgot to document the game].

However VanLoon's 2 Orcs search a house and find a Dark Elf who joins the warband then promptly shoots one of the pretty ladies with it's crossbow! This enrages the Highlander's who then hunt down the Dark Elf.
Vyper's Goblin's search a cottage and find a magic bracelet which gives a bearded goblin +1 T whilst the rest of the warband get too close to the Nurgle Sorcerer in the tower who casts Stream of Corruption on them, choking a couple of Beastmen to death.....

Below we can see the Chaos Ogre and (eventually!) the Chaos Dwarf and his bagpiper charge into combat with the Necromancer and the Human adventurers in the doorway of the church in the graveyard. The Necromancer routs and flees towards the Highlanders who promptly kill him and then the human adventurers make short work of the Khorne warband (helped by the Parrying Blade), even though the Ogre had healed his wounds in the townsquare fountain! In the background the archers, led by the halfling, make a pincushion of the remaining Plaguebearer: 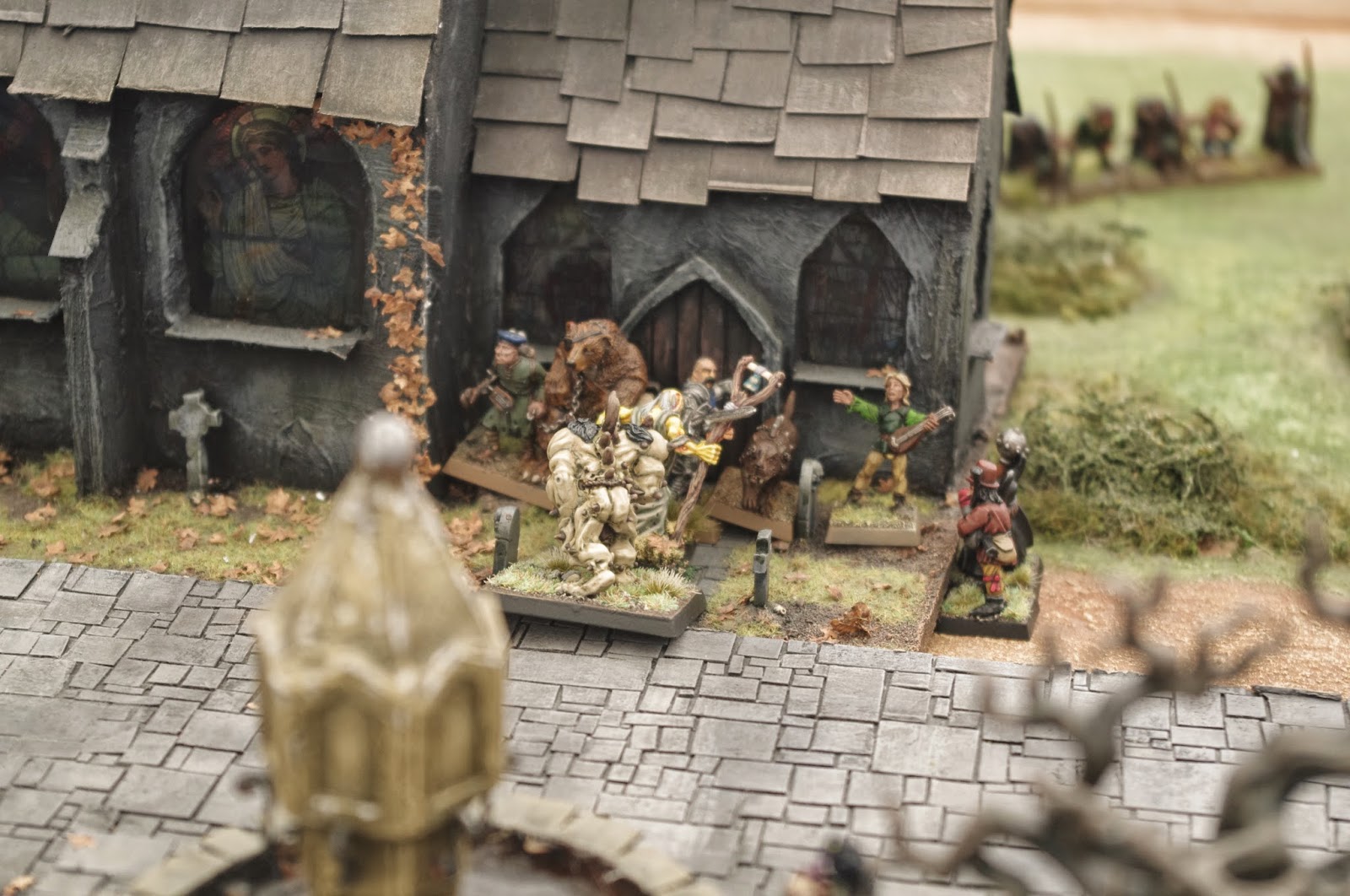 As the game draws to a close the Nurgle Sorcerer uses his Staff of Nurgle to turn a hapless Beastman into a pile of writhing maggots and then casts Miasma of Pestilence, halving all enemies characteristics by half! The Chaos Dwarf loved moving one and a half inches up the tower! 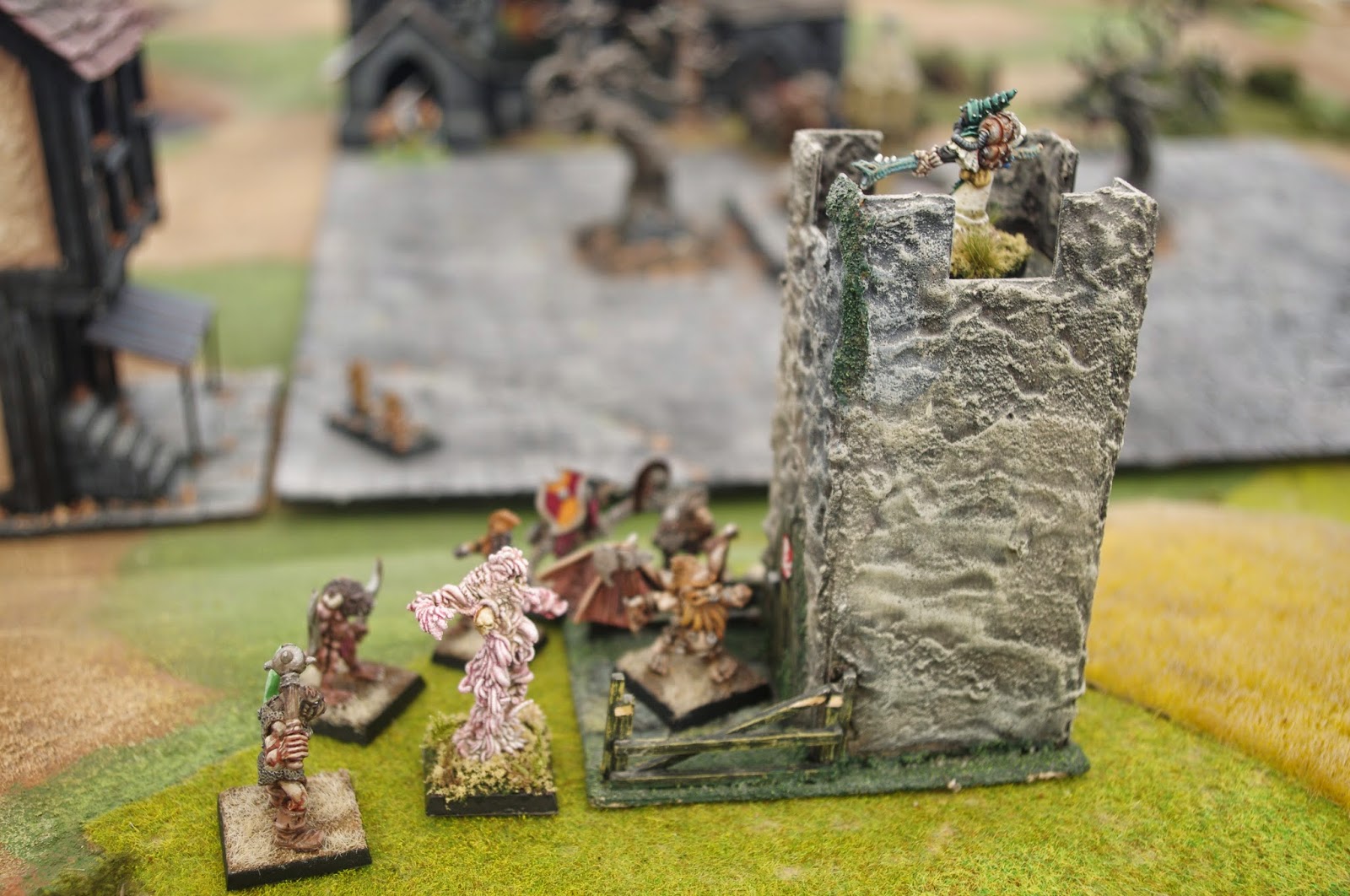 The game ended when the Chaos Dwarf reached the top of the tower, defeated the Sorcerer, and in a true act of Khorne, picked up the magic staff and snapped it in half! He was instantly rewarded by his Patron (crossbreeding with a Fleshhound!) and simultaneously destroying the tower in a huge explosion, killing several of his henchmen and wounding himself! 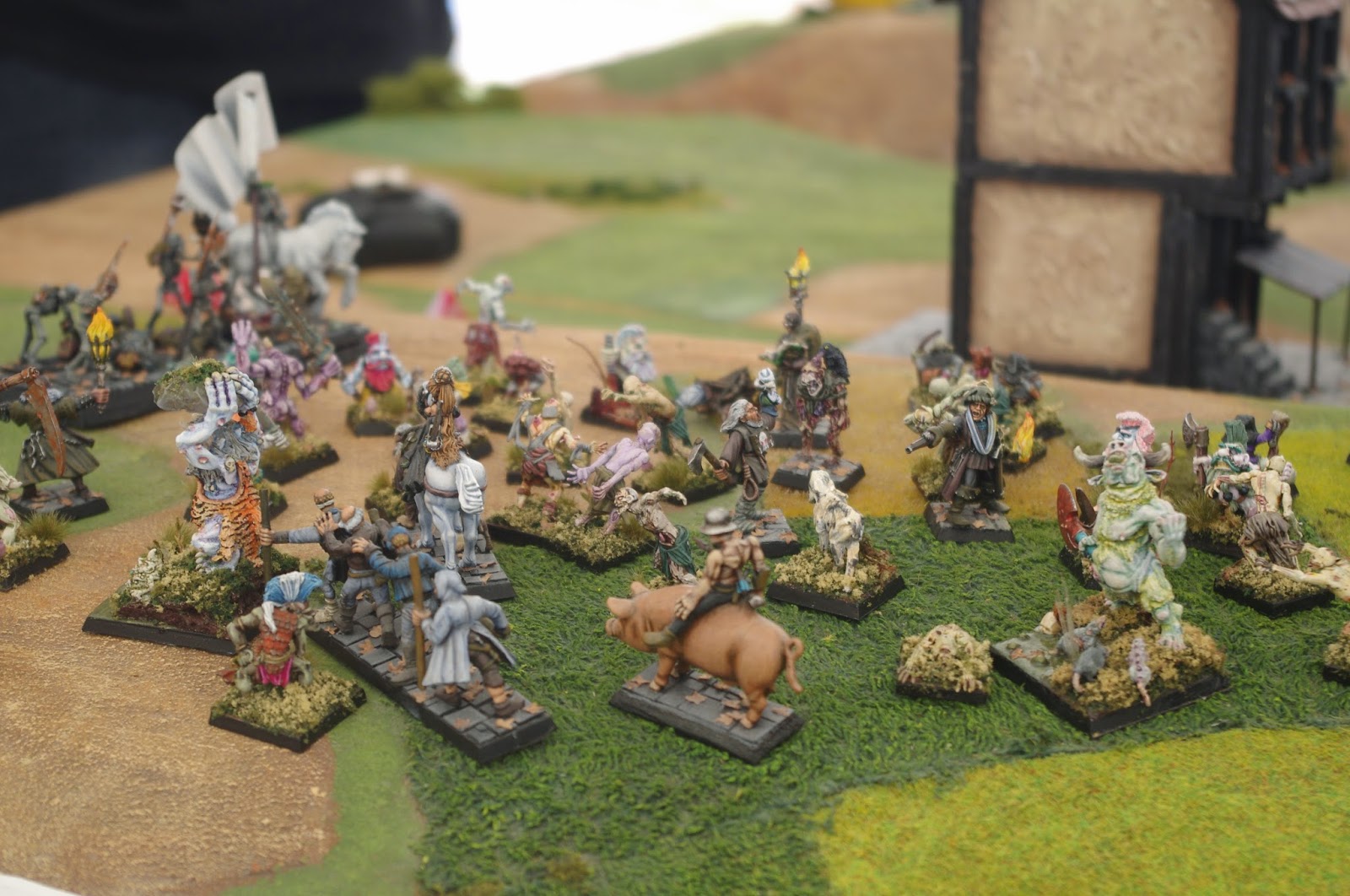 Above is a pile of NPC casualties, as we all went off and discovered the winners of the Oldhammer Painting competition. Thanks all for participating, it was loads of fun and played in a great spirit as we muddled through the 3rd edition rules!

I've just finished my first full week of the school summer holidays and have triumphantly decorated the living room, much to the happiness of the wife. I don't know how many times I've had to traipse to B&Q and back though...: 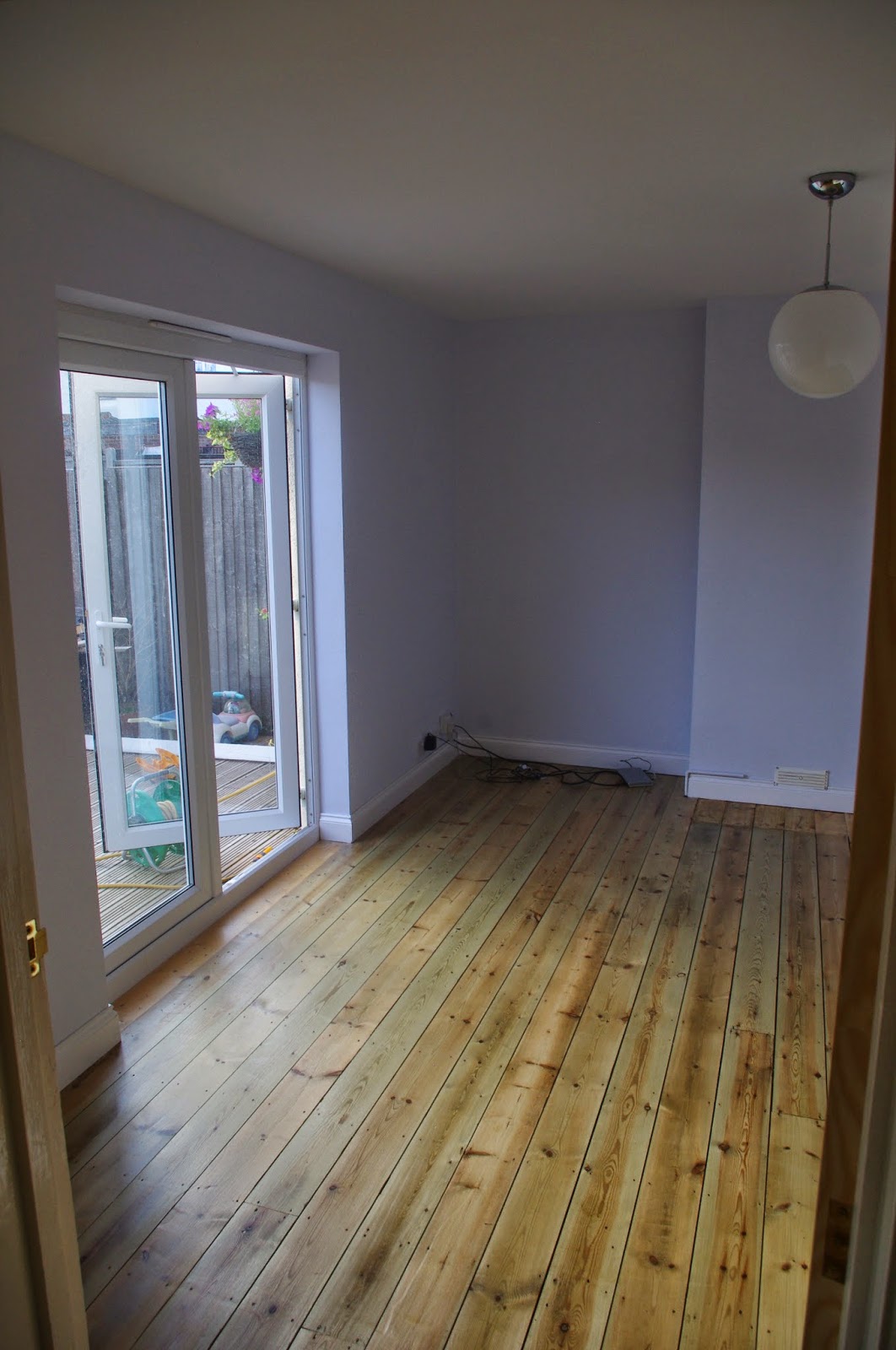 There is a correlation with my hobby I realised, everything is just scaled up - so instead of trimming mold lines with a small scalpel I've been sanding floorboards with a heavy duty, powerful electric floor sander. Applying primer with a roller rather than a spray can and adding layers of paint with a huge decorating brush rather than a Windsor and Newton Series 7 size 1 brush! Now I consider myself quite skilled with a brush, but boy do I struggle with skirting boards, perhaps I should have reached for one of my smaller, hobby brushes for the corners....

In the evenings I have treated myself to some hobby time and have had to adjust everything back to a miniature scale - which each time took a little while - my painting seemed slightly heavy-handed at first. So the first 7 Mantic zombies are complete awaiting another couple of batches of 7 which I'll start sometime soon: 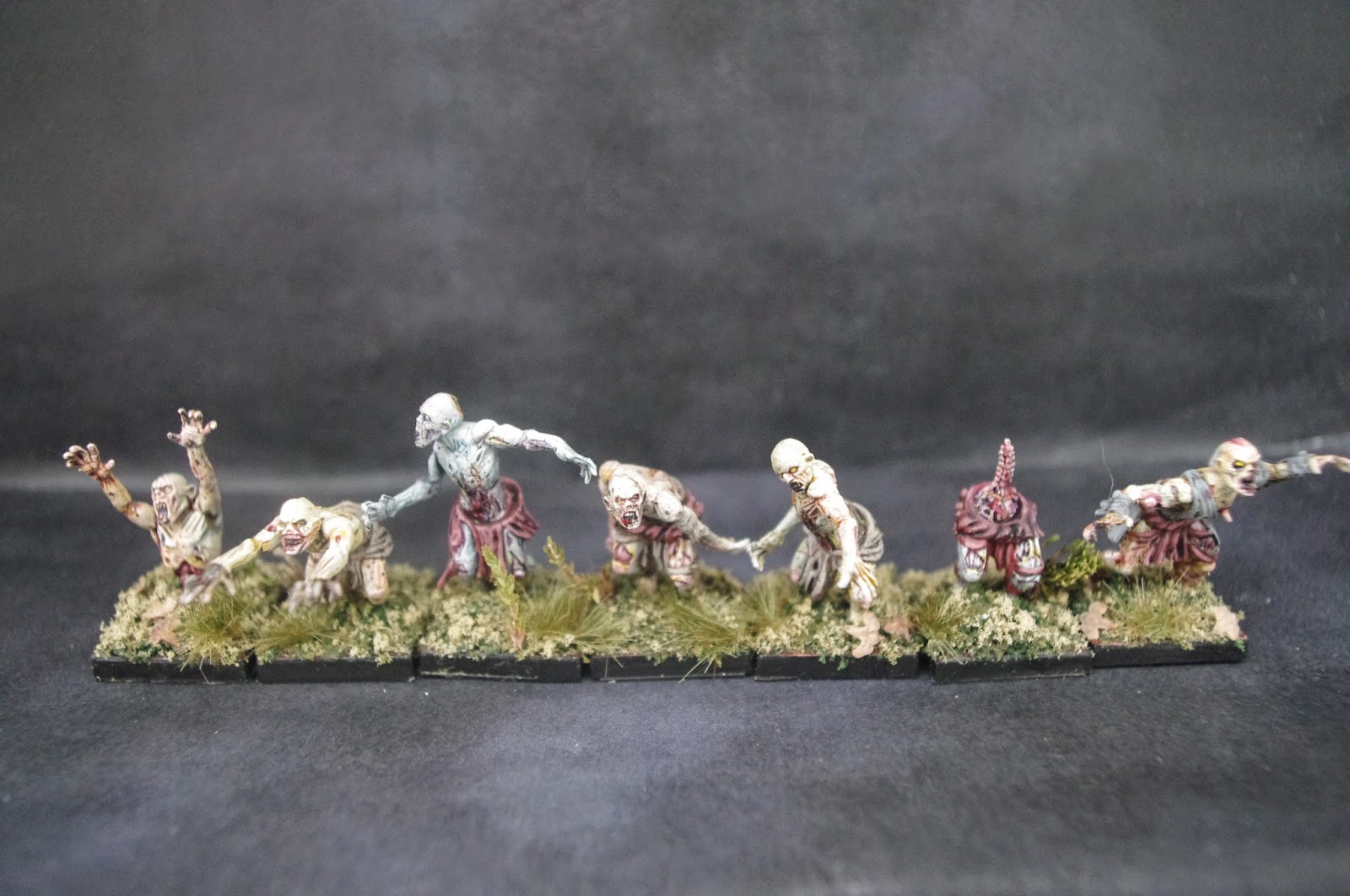 These guys will be making an appearance at BOYL 2014 (next week!) and I hope to add to the completed list before then, now the decorating is done and I'm in the wife's good books!
Posted by Stuart Bannister at 21:47 No comments: