The Path of the Lost and the Damned (a picture story) 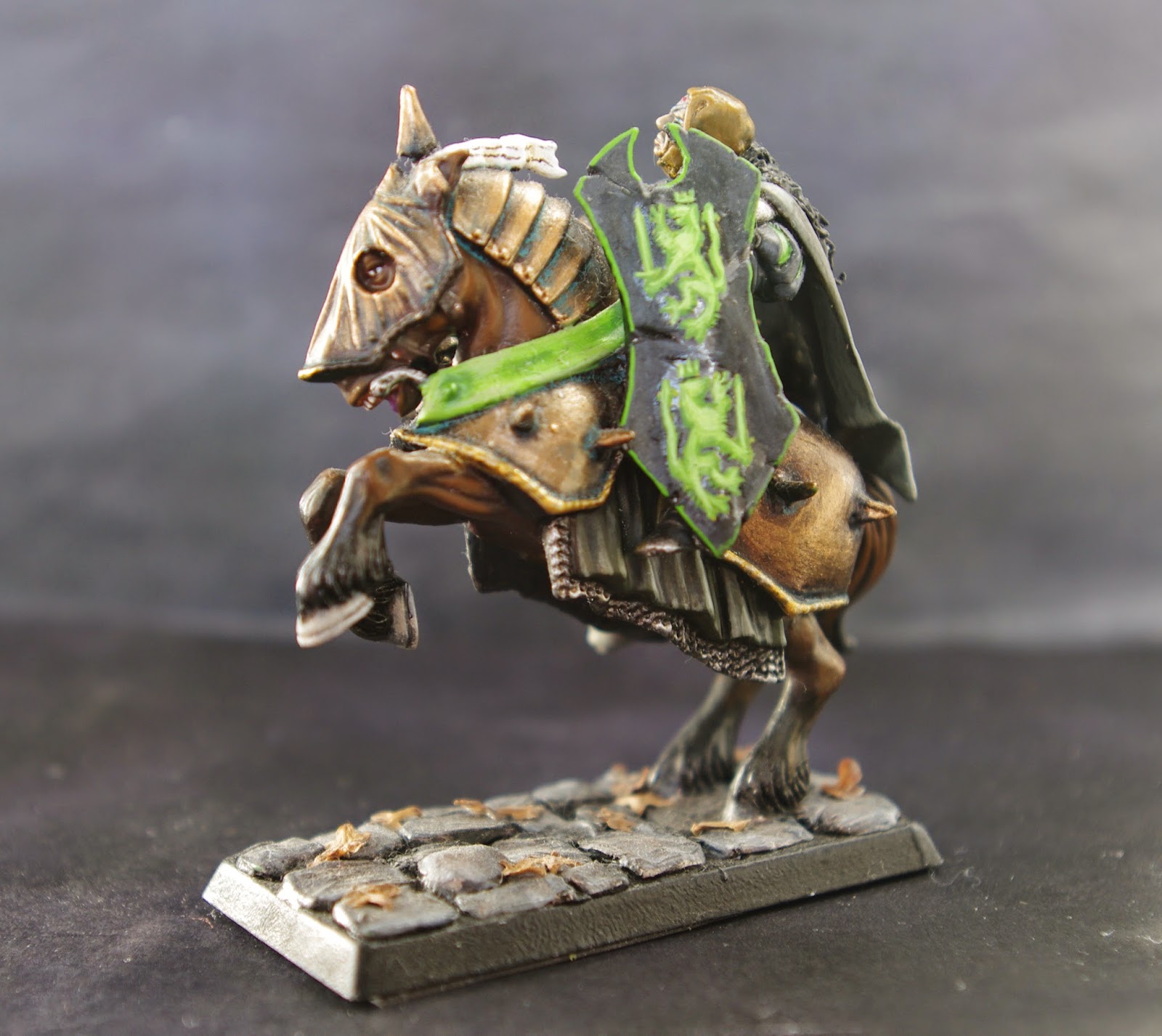 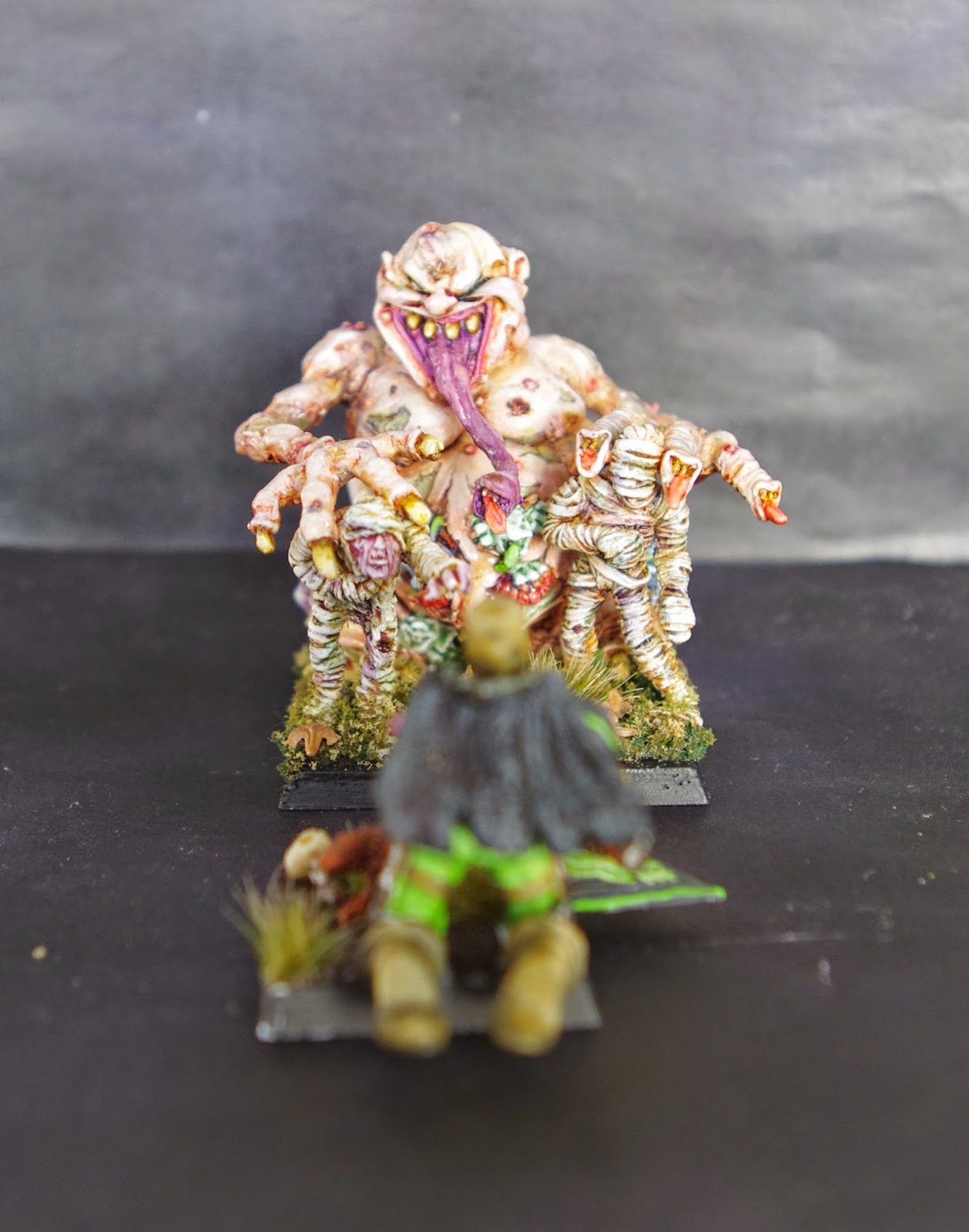 And then... ok it's a swift path to Damnation 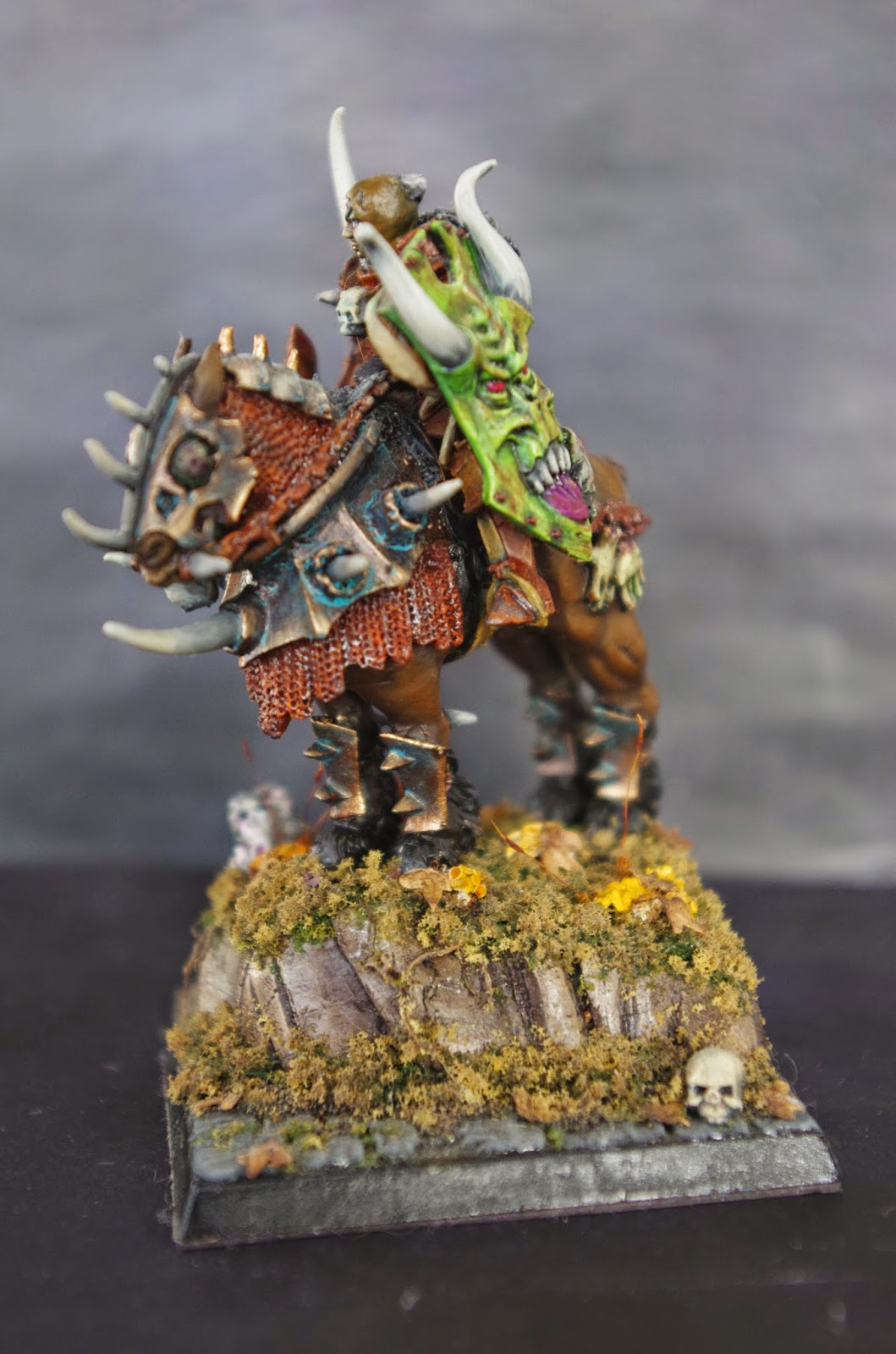 And here are some shots of the conversions I created to make this happen: 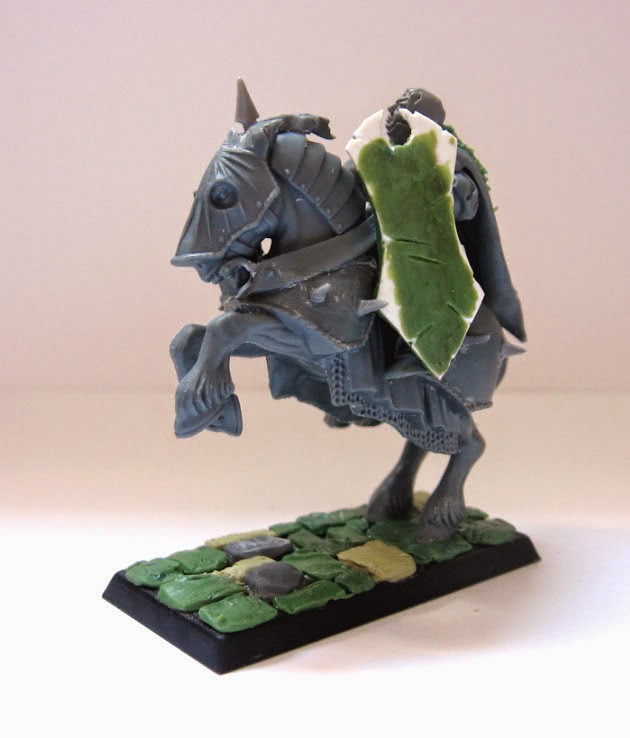 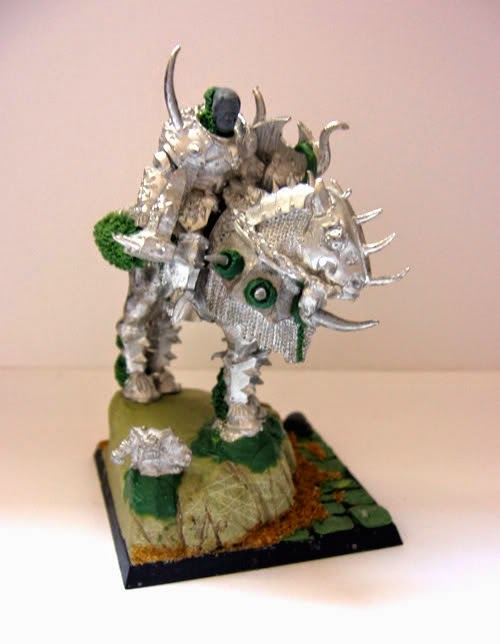 ﻿
Posted by Stuart Bannister at 23:11 No comments:

A Great Unclean One (and some gloss varnish)

Papa Nurgle showing benevolence in taking lepers under his care to unleash further contagion amongst humanity.

When I was a nipper, I coveted one of these gorgeous, Nurgly, lumps of lead to paint up but it was a bit too expensive for my pocket money income at the time. They're still not cheap on eBay but certainly more affordable, so I bid and won!

A fair few months later and he jumped to the front of the paint queue, mainly because I had an idea to add some followers to his base, in this case a couple of old Citadel Mummies that I had in my lead pile. I wanted to create a feeling of Papa Nurgle showing his misunderstood benevolence to his followers with leprosy.

So here's what I came up with: 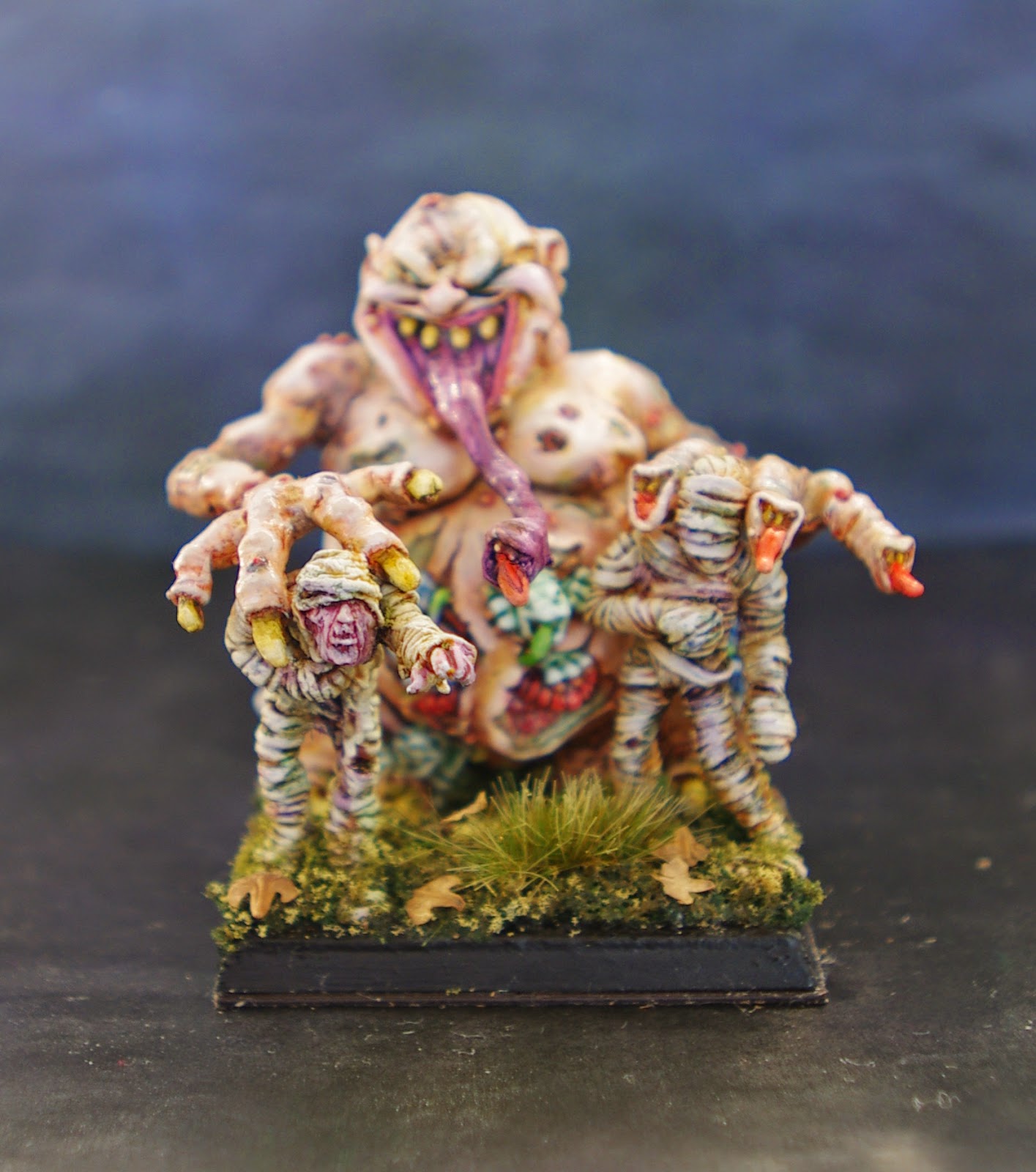 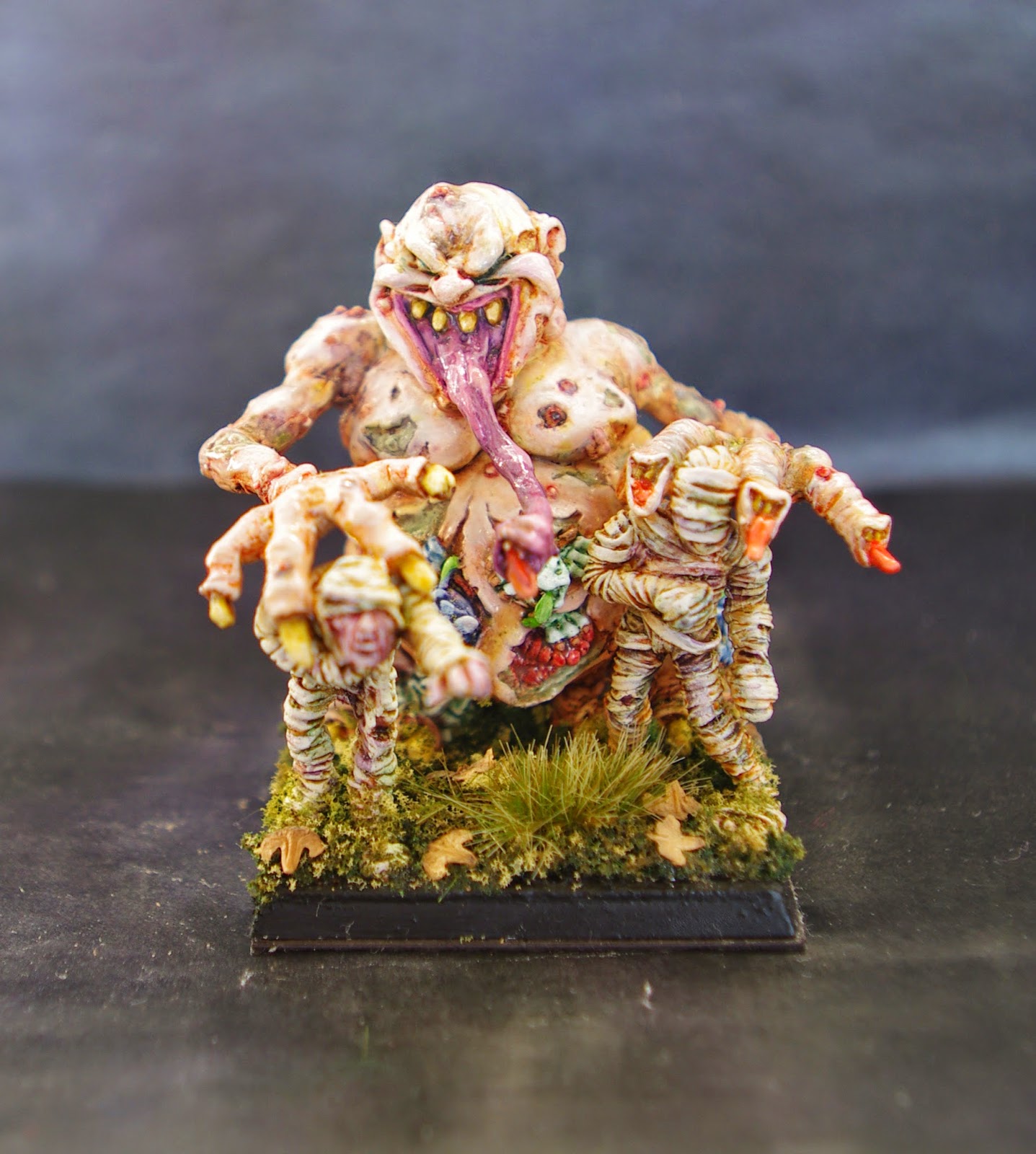 A bastard to photograph well with two depths of focus. 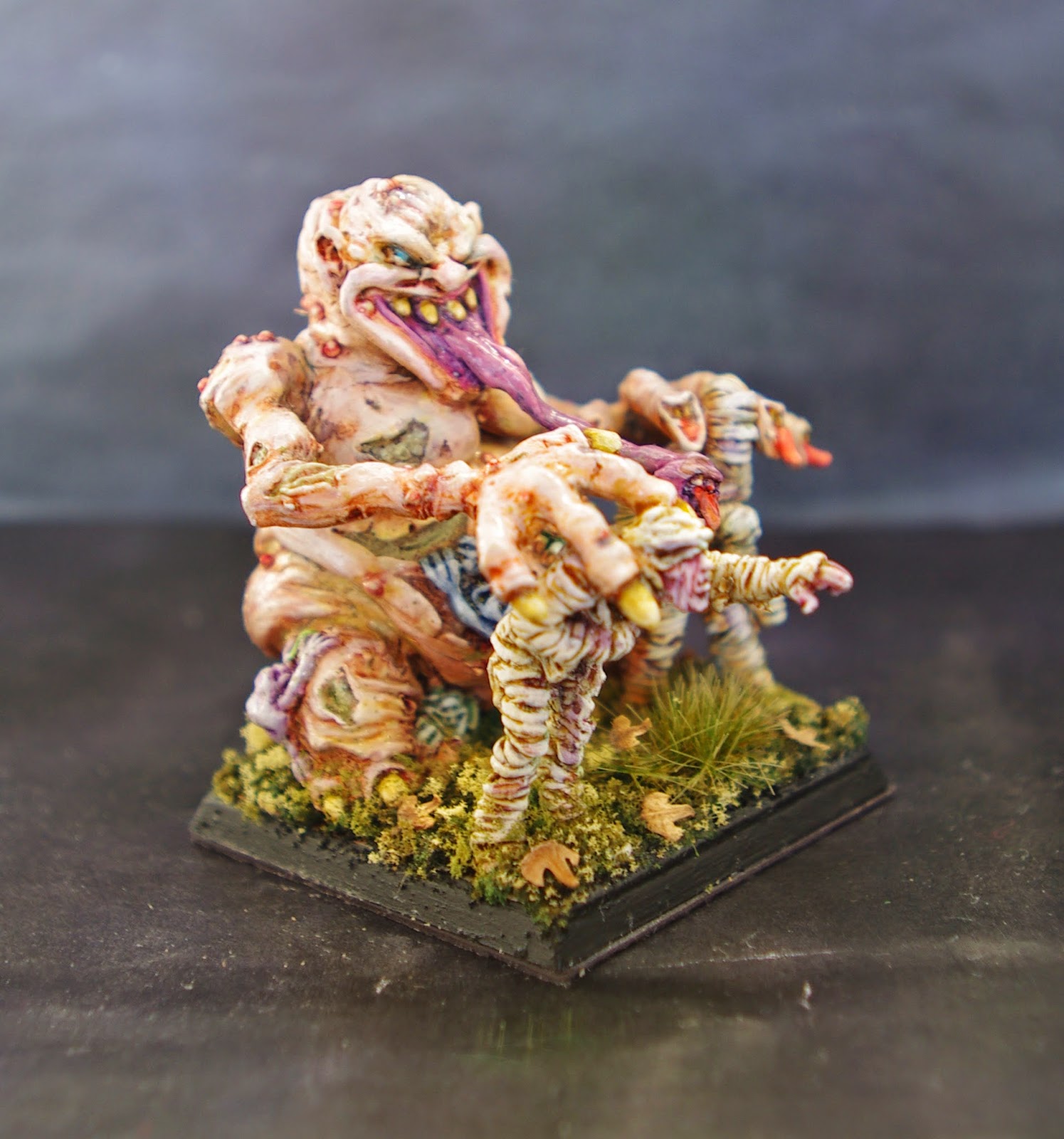 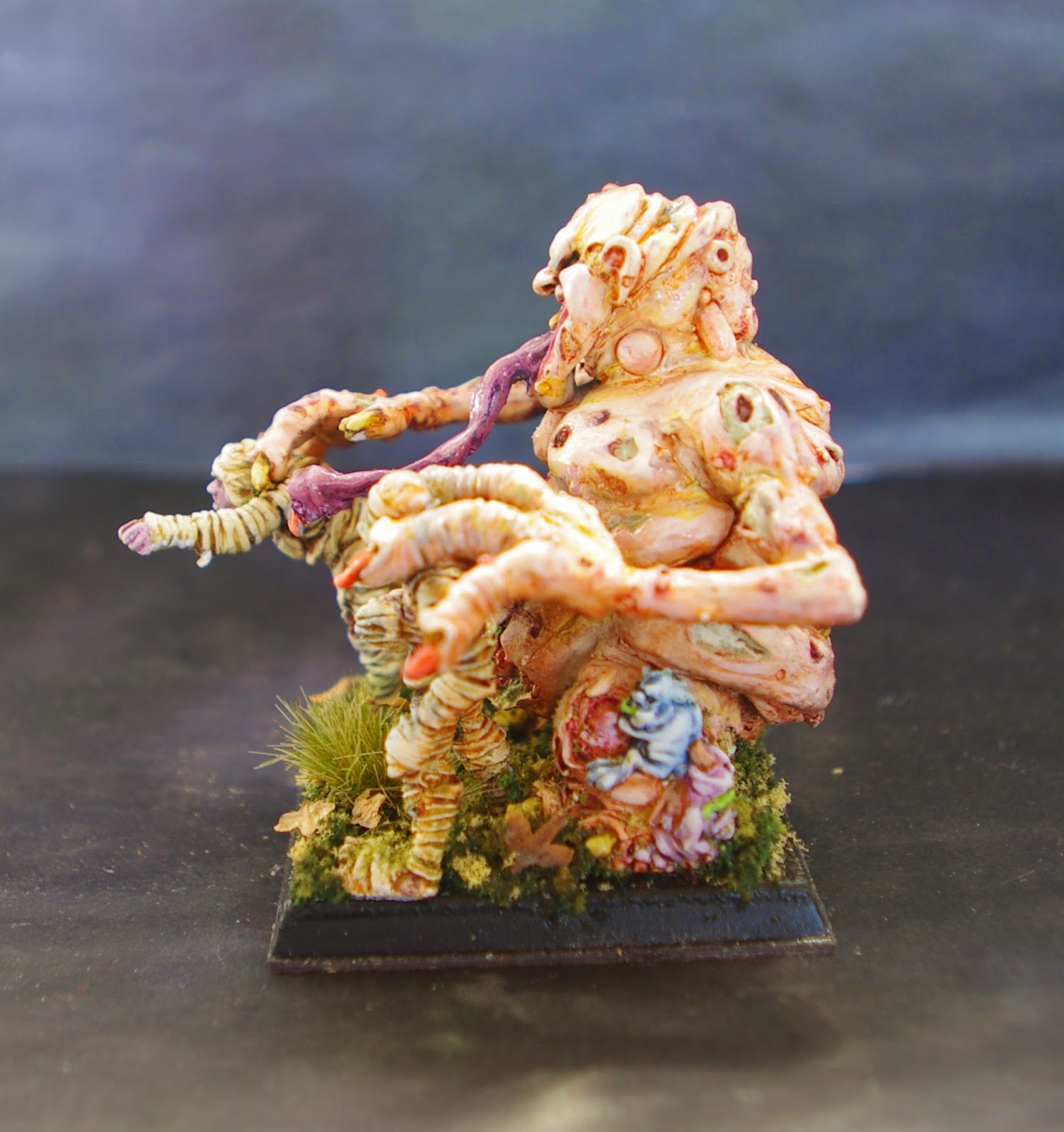 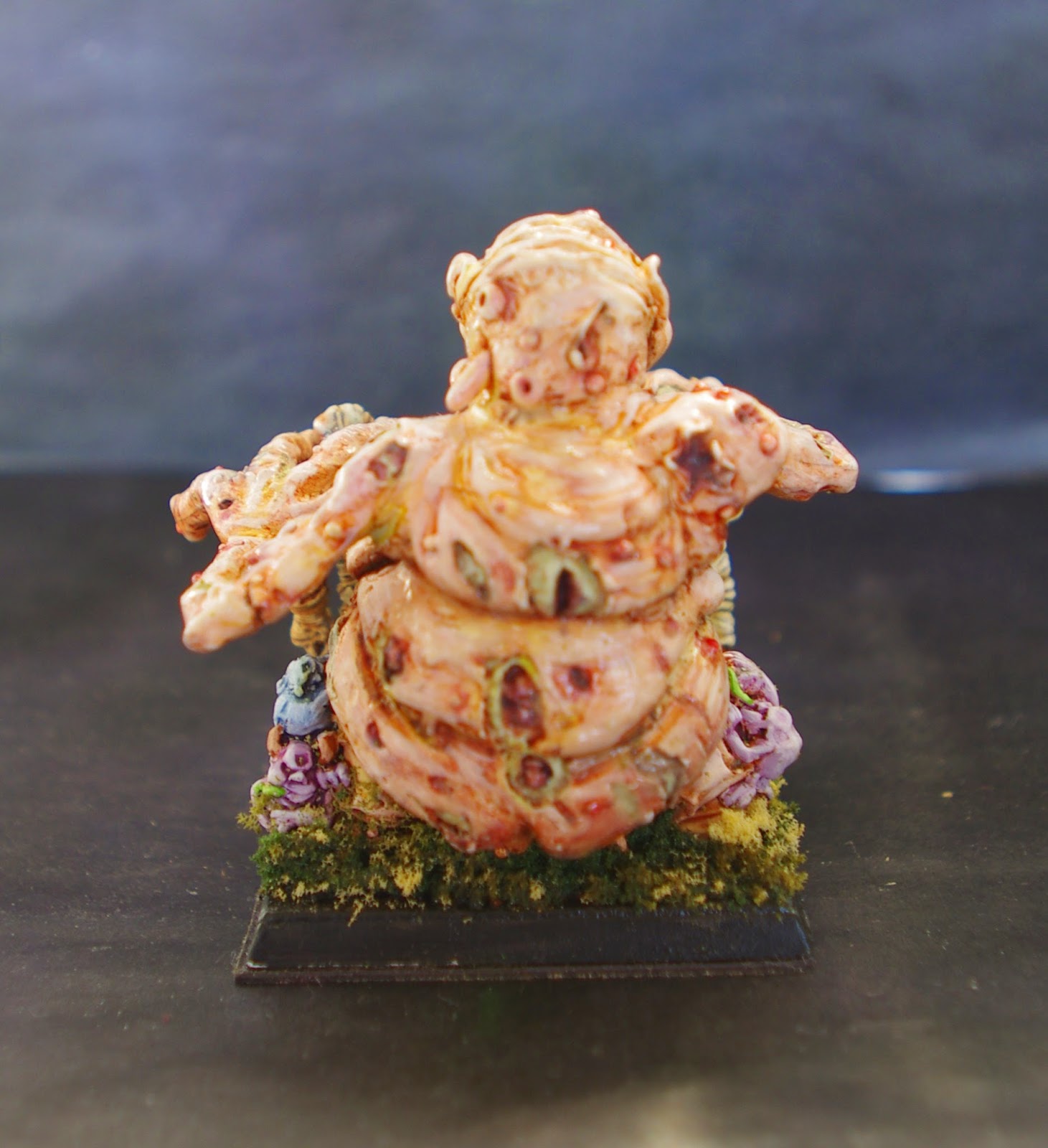 So for this fine fellow I tried some experiments. I undercoated white and then applied that old Chestnut Ink to the model (with a touch of washing up liquid). I then highlighted up with some white. So far so good.

When I tried to apply more washes over the Chestnut Ink I had forgotten that the old inks were not designed to be re-wetted and certainly not with a modern wash that has some washing up liquid added. So the yellow in the recesses is actually where the Chestnut Ink was wiped away with the application of the next layer, leaving white and then the yellow wash settled there. Now I was tempted to start again, but realised that with some further details I could make it work and I'm actually quite pleased with the result, the yellow in the recesses and folds of his skin helps add to the putrescent feel of the model.

A few more glazes of purples, reds, blues and greens followed by some layering work in the wound areas created a model I am pretty happy with, especially as it did not take too long to paint. It was the individual Nurglings that took the most time.

Similar washes of colour were applied to the Mummies, the only difference is that there was some drybrushing with Bleached Bone up to white to pick out the details of the bandages.


And here's a poor shot of the model pre-painted. You can see some of the dried seeds I also used embedded in the greenstuff to create boils etc. The end of the tongue is a cut up plastic goblin mouth.

The only other problem I had during the painting of this model (which includes the difficulty of painting behind another model already attached to the base) was that the because of the Chestnut Ink base layer, the paint was susceptible to wearing off quite easily when being held during painting, this meant I had to add some gloss varnish to keep it intact. I don't have any matt varnish to dull it down, but I quite like the shiny, sweaty putrescent skin. And the gloss finish reminds me of the painting style of the Realm of Chaos era anyway.

Thoughts on gloss varnishing in the modern era?
Posted by Stuart Bannister at 19:40 No comments:

Family Heroquest ("Save your brother")

So my daughters really do seem to enjoy playing Heroquest with their Dad, the game is so simple to play yet is engrossing enough (with some inventive GMing) to keep their interest going for a decent dungeon crawl.

This is the second game (the first is here and I used the same house rules) which I recently played with them, they controlled their own character and one of their parents too (I still can't get the wife to play..) and started with the following scenario:

A glorious spring day and our family were enjoying a long walk, following old trails through the dense heather. The little ones occasionally ran ahead to hide behind a twisted tree and then jump out at their parents. This eventually led to a game of hide and seek, young against old. It was the kids turn and they searched out a small trough in the landscape, hiding behind a fallen tree; the parents keeping a beady eye open behind their hands, just checking yet partly spoiling the game. After some exaggerated pretend searching the kids could no longer contain their silence and the parents made a big play of finding the children. But one was missing! The youngest....

In a very short time the search became serious and frantic, where could he be, why was he not responding to the desperate shouts? Moments later the two daughters discovered a small hole, a hole that he must have fallen down and with some extra digging the family jumped down in search of the young brother....

Posted by Stuart Bannister at 14:40 No comments:

I couldn't resist on two counts. One, this speed painting malarky really focuses me to paint and more importantly complete a miniature and secondly, I only have two of these Jes Goodwin wardancers (such great sculpts) and felt that I had to paint up the second one too before he got separated and potentially lost in the great, relatively static, painting queue.

So here's the finished miniatures:

And this is how I got there in under an hour:

I had to stop here for the night, as I had to help put the kids to bed and after that, really didn't feel like carrying on (I was lured onto the couch to watch tv with the missus). But I did the following night. So where was I at 22.49...:

And here's the pair of them, pre-basing: 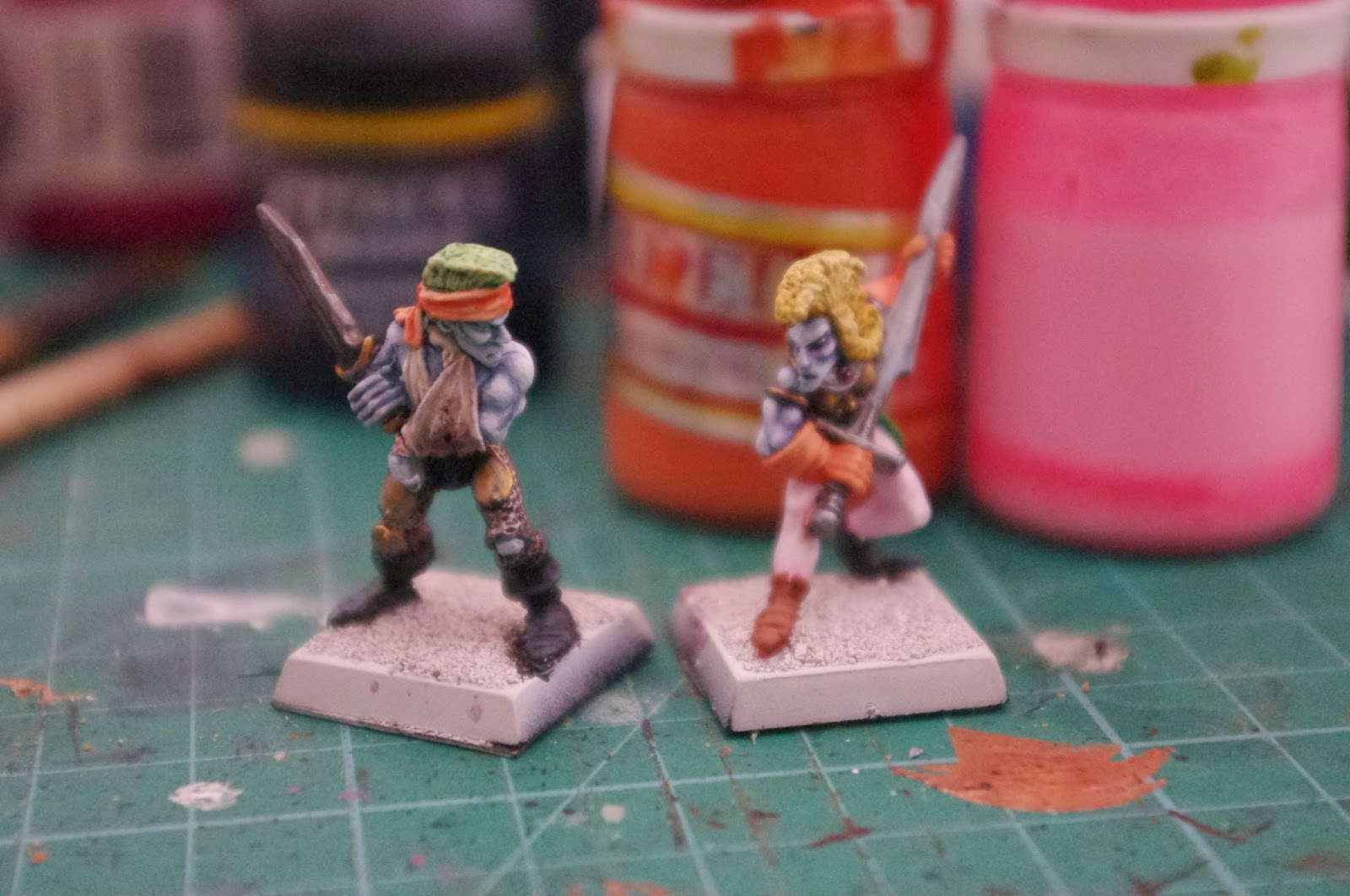 And both finished and looking quite hostile. 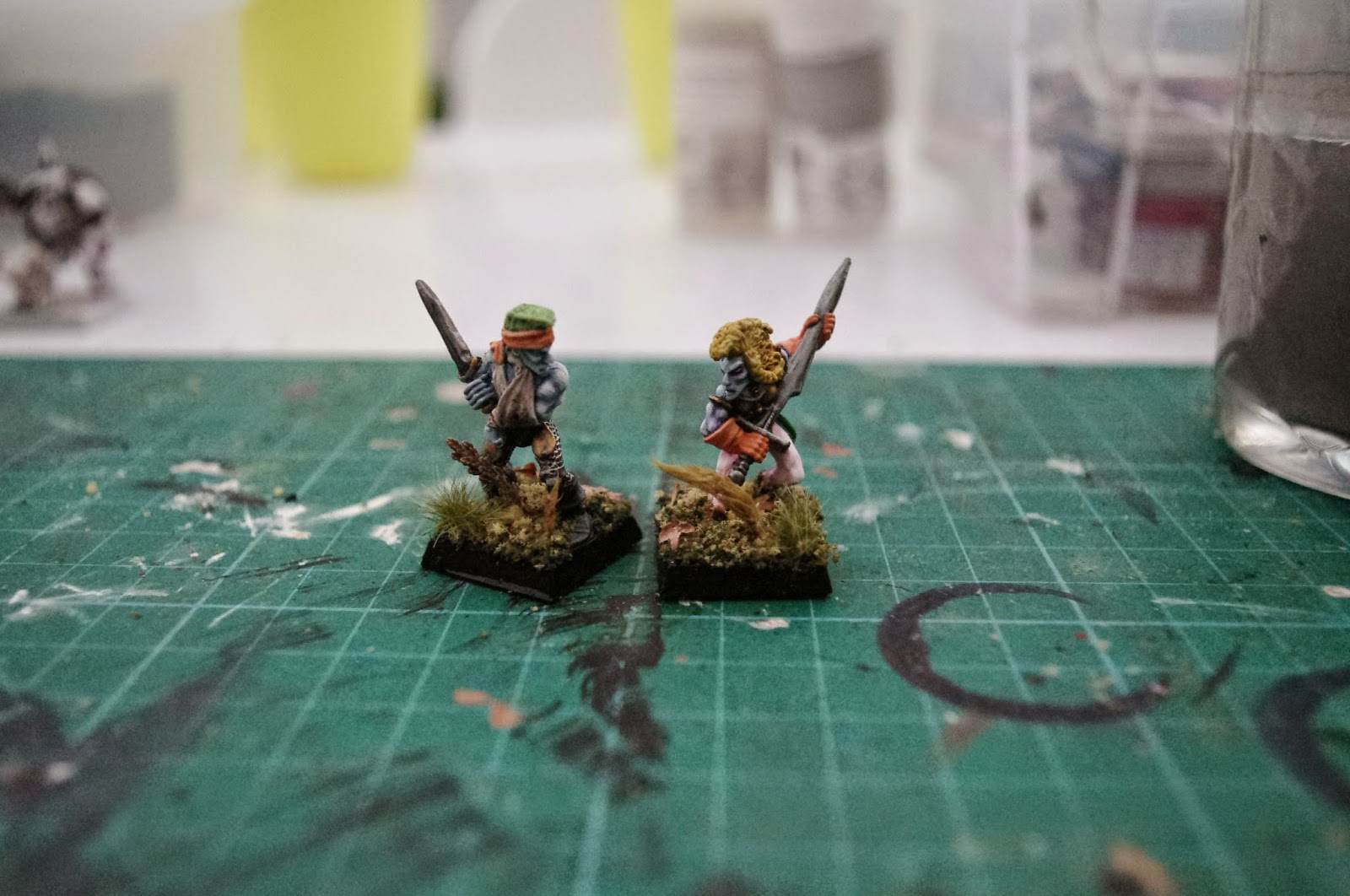 So obviously I made these fellas look like Drow with their blue skin; they'll eventually be part of my Lost and the Damned retinue table challenge, when I get around to painting the other 4 elves that will accompany them.

Thanks for reading.
Posted by Stuart Bannister at 19:57 No comments: