Kids imaginations never fail to entertain me, so I devised a very simple rule set for them to play with some models and some scenery. Too many rules constraints their imaginations so we played very much in the spirit of an RPG with some Mordheim and WFB mechanisms thrown in. Quite simply, they could do what they liked! The only restrictions were movement; 4" for humans and dwarves, 3" for the undead (apart from the Necromancer). Models could take two actions, but never the same two, the only exception being move and move (sprint) - which the undead could not do. Examples of the two actions might be: move and search, climb and shoot, fight and move, spellcast and communicate etc.

Dwarves and Humans (including Necromancers) hit on 3+ and wounded on 4+ (shooting and fighting). Undead (4+ and 5+). A model in cover got a saving throw depending on the type of cover. Skeletons were also armoured so had a 5+ save including a magic ward.
Each warband had a leader and second in command. One of which had to be a fighter and one a spellcaster. The fighters increased their hit and wound by +1 and had a save of 4+. Spellcasters could cast any spell they imagined, the difficulty (determined by me) affecting the difficulty of the dice roll. For example a simple flight or fireball spell might be a 5+. A destroy building a 10+.

And that was it and even then I changed some rules as we played to help them engage with the game and do as they wanted with their warbands.

So my 13 year old daughter, seven year old son and I went treasure hunting in a village named (by them) Hauntsville. 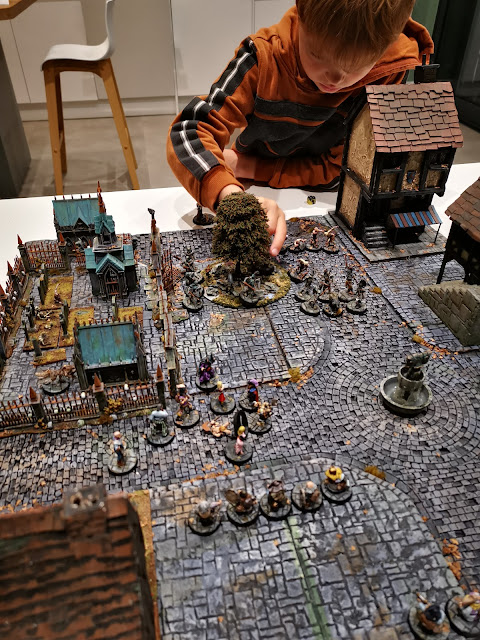 Three warbands were on offer, Undead, Humans and Dwarfs. My son was desperate to play the undead and my daughter wanted to play with the human heroes. I was left (but quite happy) with the Dwarfs.

I set up the village using my scenery and gave them a bit of background information:

The village of Hauntsville had been long abandoned by it's inhabitants. Stories of unparalled riches combined with tales of never-returning adventurers were told by neighbouring villages and spread through to larger communities. It was therefore inevitable that more professional adventurers would band together for safety in numbers and descend upon the ghost town looking for that treasure to fill their bags and pockets.

We set up along different edges, diced off for who would go first each turn and decided how many miniatures we wanted to bring on each turn. 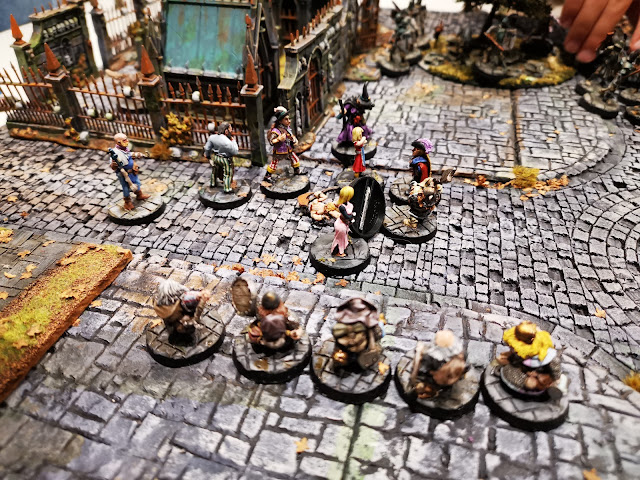 My son went first and advanced all his skeletons forward in a long line. I went second and moved my Dwarf scouts forward towards the town center, taking out a skeleton with a well aimed crossbow shot. My daughter than came on and charged my dwarves with a successful Charge! spell (9+)! 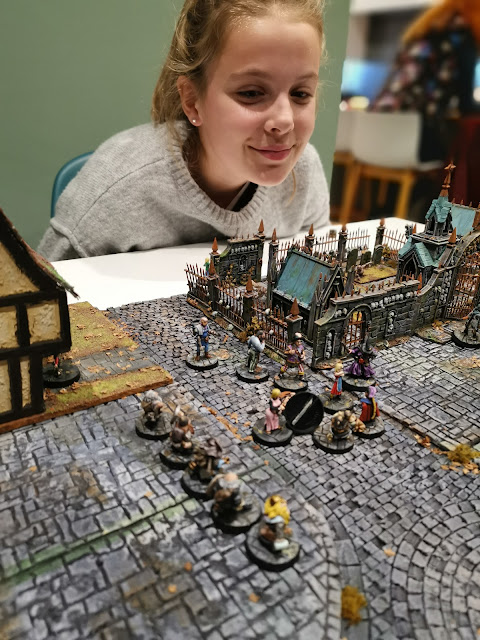 A slightly rueful smile as my other dwarves back away and my leader knocks out one of her humans! (I decided at this stage that death after wounding was too harsh - therefore after a successful hit and wound the model was killed on a 5/6, knocked out on a 3/4 (recovers on subsequent turns on a roll of a 4+. 3+ etc) or lightly wounded on a 1/2 (-1 to movement and +/- to hit/hitting etc) 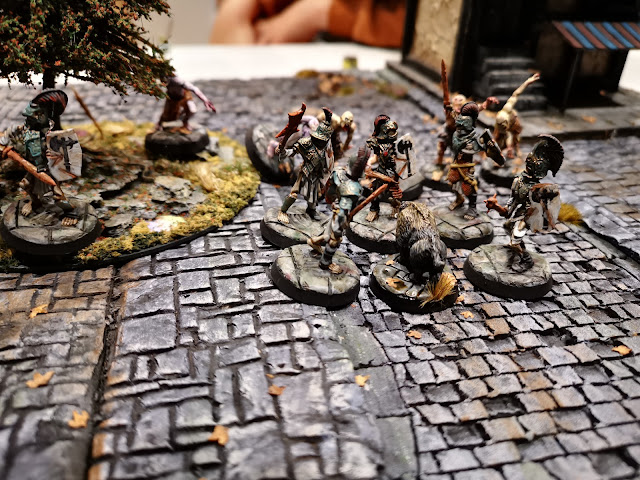 My dwarven boar then charges into the skeletons, taking one down 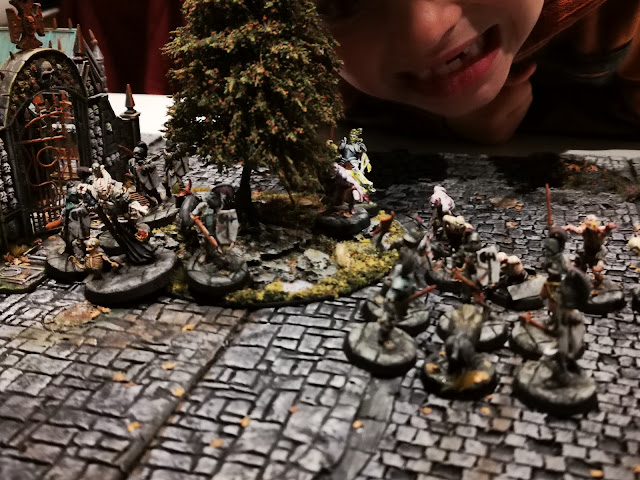 Before all the other undead gather and close in, eventually killing the tusked mascot. Some more skeletons fall to crossbow bolts and I decide at this point that I have run out of quarrels as my son is not enjoying removing so many skeletons to shooting. I remind him that he can raise the dead and he does, successfully passing his spell test and bringing 3 zombies back. 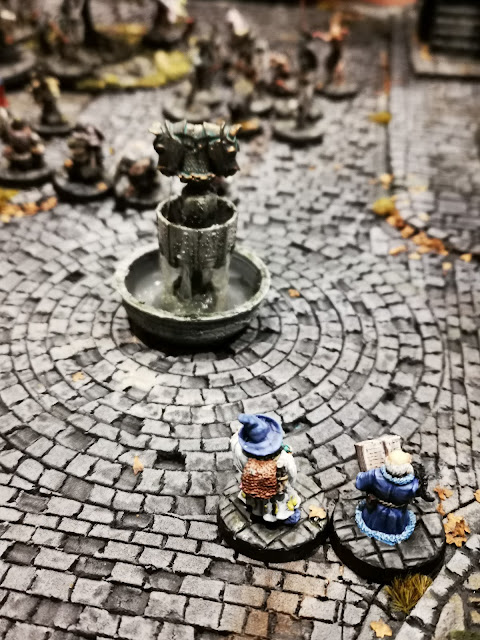 From the town center and in retaliation, my dwarves cast fireball and return those 3 zombies to the dead undead. 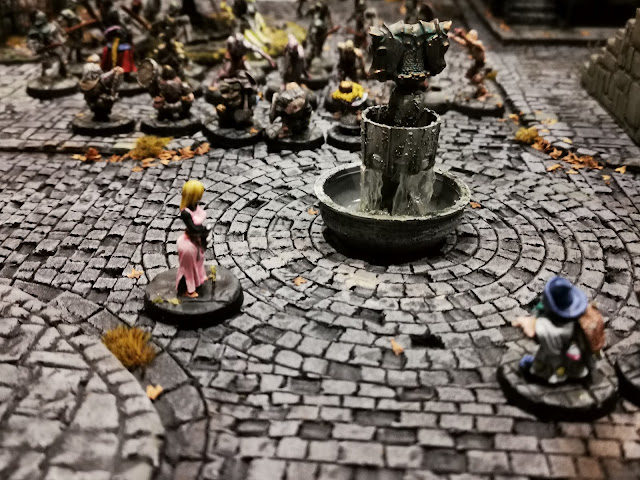 Meanwhile, my daughter has seen the folly in attacking the dwarves and decides to use one of her actions to communicate between her leader and mine, brokering a peace deal. We agree and concentrate our combined forces on the growing undead menace. My son (slightly surprisingly) relishes this! 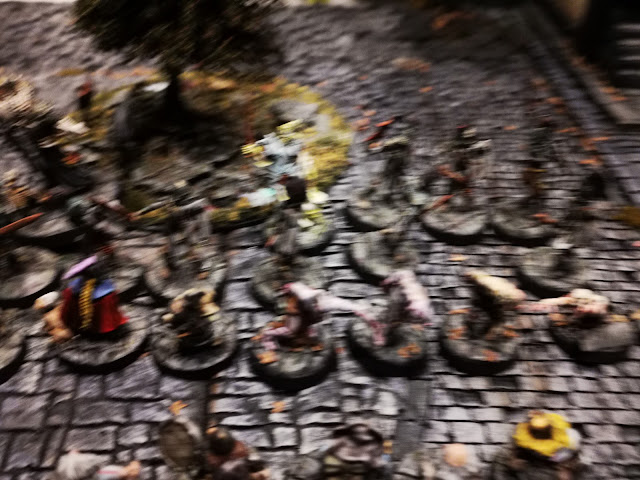 A massive melee ensues, the action so frenetic that I can barely focus my camera 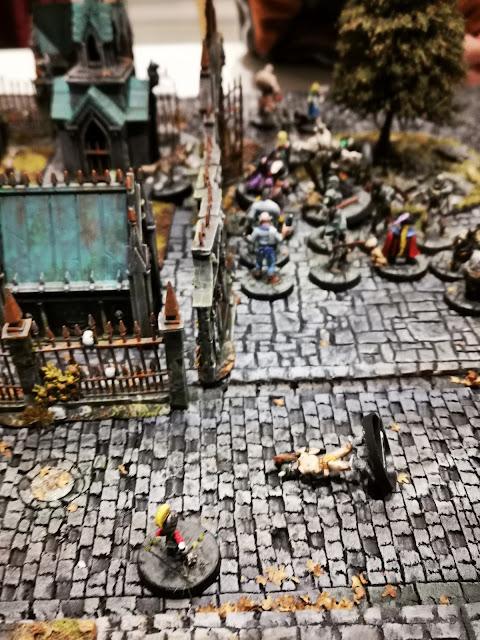 My daughters humans then decide to break off from the engagement and start searching for treasure in the houses and in particular in the graveyard. Searches were successful on a roll of a 7+ and D6 x 10 gold were found and kept a track of. My daughter was very successful gaining around a 100gp! My son's undead wanted some of this and broke off their engagement with the dwarves and also started searching! He got about 60gp and some new zombies from the graveyard! 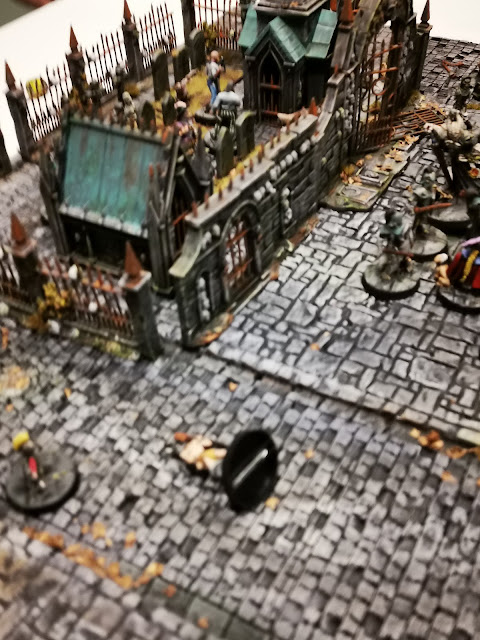 Her barbarian is still knocked out! 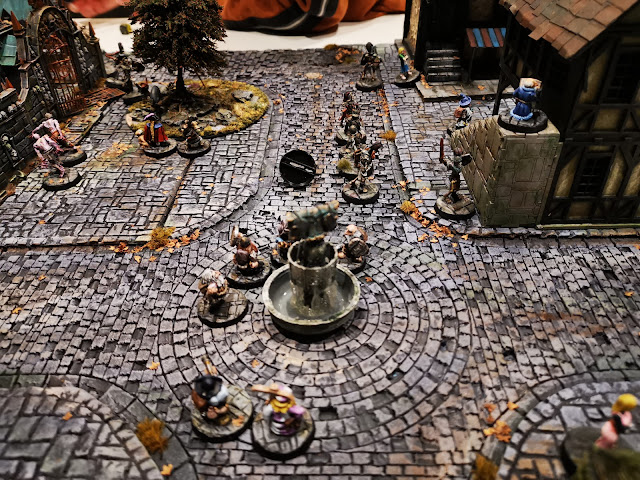 All combats are now off  (apart from a couple of skeletons who clearly want to cause more carnage) and everyone goes off searching. I think the wifes shout of "dinner's nearly ready" sped up the game to a conclusion! 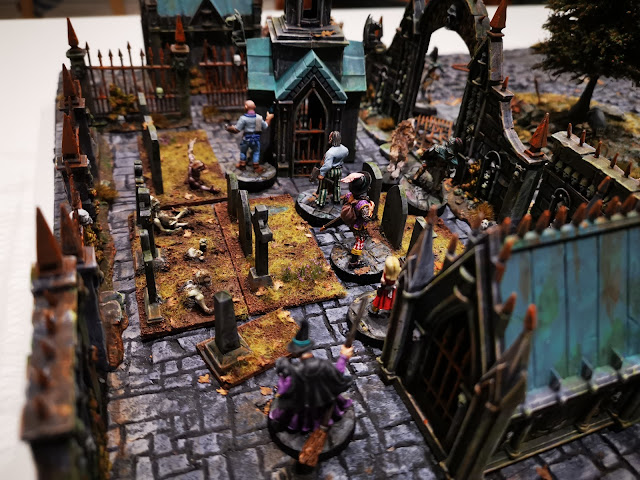 The humans continue their successful search for treasure, with the occasional attack by a creature of the undead. 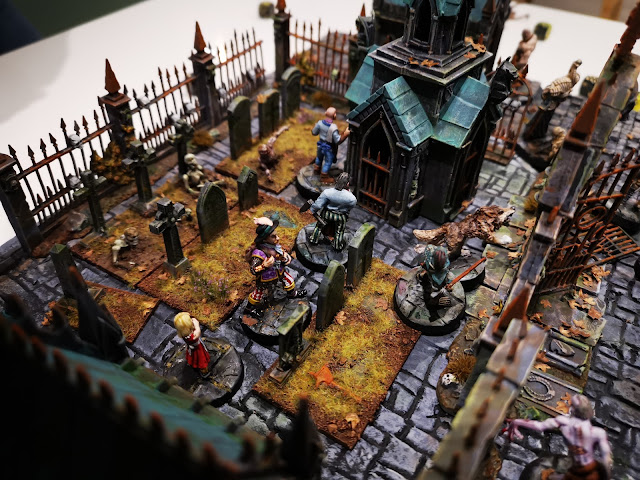 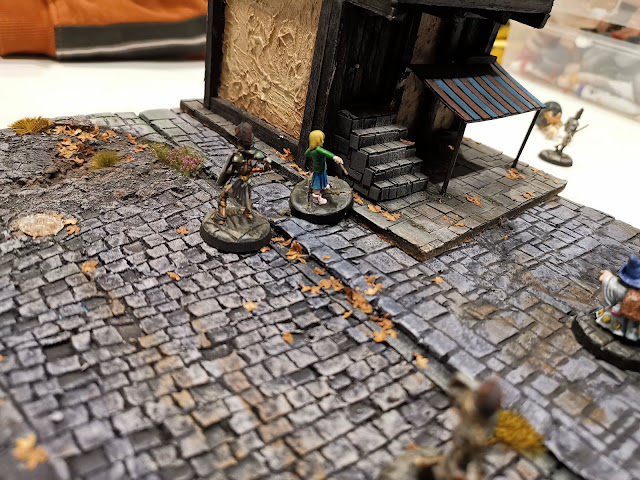 A mad dash for the only building not to be searched, the human second in command gets their first using her sprint, but is then caught, attacked and slain by a wandering skeleton! The dwarf wizard closes in  and destroys the skeleton with a slay undead spell. He then hoovers up the last of the gold coins before dinner is served.

We tally up the gold coins (humans easily have the most), although the undead have swollen their warband significantly. For our next game I will write up ways that each warband can spend their coinage to improve their warband (extra members, weapons, equipment etc).

It was a fun couple of hours for sure.
Posted by Stuart Bannister at 09:50